Last week I wrote that Upstate New York needs to fundamentally change it development paradigm before it can demand more infrastructure funding. But choices about how to plan and develop aren’t just (or even primarily) a regional choice; they are, at their core, local. And at a local level, the choices are if anything even more stark.

One of my favorite planning-related books of recent years, for its challenging argument if not for my agreement with every aspect–is Chris Leinberger’s The Option of Urbanism. His argument is that given market and demographic trends, urbanism–a pro-urban agenda favoring urban growth, urban amenities, and new paradigms of transportation–is not only again viable in America, but the way of the future. While Leinberger’s case may be overstated–and his emphasis on market forces will certainly turn some off–the framing about cities and stakeholders again having the ability to make an active choice for urbanism, after 60 years of pro-suburban policy, is a useful one. And Albany is facing a critical moment where it must choose whether to make that choice.

CDTA, the local transit authority, wants to consolidate several bus stops in the vicinity of the intersection of Lark and Washington in Albany, one of the system’s major hubs. The particulars of the plan are somewhat complicated and I can’t find CDTA’s graphics about it, but the gist is that it would consolidate the four stops on the corner of Lark and Washington into one mid-block stop on Washington between Lark and Dove, and pull in the current local stop at Dove as well. This would alleviate several complex situations that are dangerous to pedestrians and drivers alike. It would also allow CDTA’s #12 bus–one of the system’s busiest, running from downtown to SUNY and Crossgates Mall–to straighten out a kink in its route caused by the fact that buses can’t make a stop at the corner of Lark and Washington and then get back into the left lane to continue straight on Washington as it splits from Central Avenue. The stop can’t be moved any further west because it would create crazy congestion in the intersection, or east because buses would back up at the existing express and local stop at Hawk, just one block down. 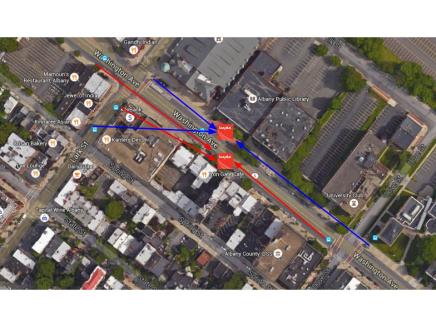 Bus stops to be relocated

The plan has sparked vicious NIMBY opposition–organized around a Change.org petition–led by the owners of the Iron Gate Cafe, outside of whose front door the new stop would be located. The opposition has also been given a boost by usually responsible Times Union columnist Chris Churchill, who I do think would typically recoil at the classist and racist rhetoric to which the opposition has predictably devolved (see below). To their credit, the Iron Gate Cafe owners have used relatively responsible rhetoric, affirming their belief in CDTA as a system, and limiting their complaints to the stop’s location right outside their door. Others, however, have predictably not been as responsible, as Martin Daley documented at a meeting last night that was publicly promoted by the NIMBY coalition, but not by anyone else (or believe me, I would have been there):

opposition because stop would "ruin Victorian block." Also calls for ped bridges so people could cross above Washington. #notkidding

A lot of vitriol & negative comments about people that ride the bus, how they ruin property values. There's a word for this, it's ugly.

Of course, this kind of NIMBYish reaction happens everywhere. What’s particularly galling about this situation is that the owners of Iron Gate Cafe–who claim to value CDTA service–and their supporters haven’t even considered the possibility that government suddenly putting hundreds of riders per day on their doorstep might lead to increased business. It’s the kind of knee-jerk anti-urban attitude typically adopted by suburban NIMBYs, right there in the heart of the densest, most urban part of Albany. It’s a paradigm in which only parking and easy accessibility by car can lead to business–and the only people who ride the bus are the ones who can’t afford to eat at the moderately nice Iron Gate. It is, to say the least, a profoundly anti-urban attitude that doesn’t even attempt to understand a mode of being aside from that of the suburban paradigm. Aside from the issue at hand–to which a compromise solution may be possible–this anti-urban attitude is completely at odds with Albany’s ability to be, to understand itself as, a real city.

For the past several years Albany has been planning a road diet on Madison Avenue, one of the city’s primary east-west arterials. A grassroots group, the Albany Protected Bike Lane Coalition, has been vocally advocating for the inclusion of protected lanes in the final configuration of the road diet, which is to be decided upon in the coming weeks or months. Despite a thorough report, including a parking census, but the PBL Coalition, all indications are that the city is not going to include protected lanes in the final plan, primarily over parking concerns (advocates suspect stated concerns about the cost of plowing in the winter are largely a smokescreen).

Albany has a lot of parking. It has so much, in fact, that even where perceived shortages exist, it’s largely because parking hasn’t been regulated well and no central organizing system exists. When Albany Med wanted to rip out two whole blocks of homes and replace them (in part) with a massive parking garage, the city commissioned a report on parking in the area from Nelson/Nygaard–and then meekly scrubbed the report from the city website when it found that the garage was unnecessary and Albany Med made it clear they were going to go ahead anyhow.

And yet–and yet! Albany continues down a path of not only not recognizing the existing oversupply of parking, but allowing even more. Capitalize Albany, the city’s downtown business development group, recently commissioned a parking study–not an access study by all modes as is best planning practice, but a parking study–that, when read honestly, basically confirmed the existence of oversupply in the downtown area at almost all times, yet called for more.

SUNY Polytechnic, the newest in Governor Cuomo’s long list of throw-gum-at-the-economic-development-wall-and-hope-it-sticks public-private partnerships, is planning three stories of student housing in downtown Albany–and three stories of parking to go with. The kicker? The downtown SUNY Poly campus is to be centered on the city’s old Union Station. 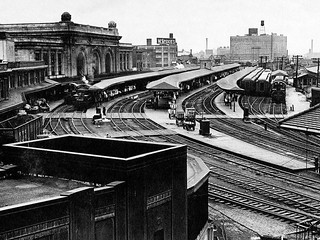 Albany Union Station then, from the Albany Flickr group 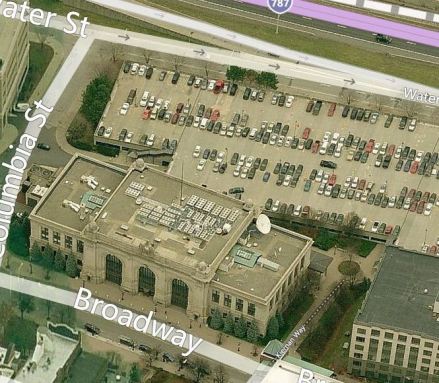 And now, with structured parking out back, on Bing Maps.

Aside from the absurdity of providing structured parking intended (at least partially) for students in the city’s downtown, which has literally acres of unused parking at night, Albany’s obsession with parking has serious costs. Prioritizing parking over bus stops, or housing, or other potential land uses, devalues urban land, treating it as nothing more than a place for suburban drivers to park their private property. And it sends the message that the city has nothing more valuable to do with itself than provide a convenient (“user-friendly,” as one suburban troll once told me it should be on Twitter) experience for those who don’t live there.

Albany at the tipping point

There are a lot of good things going on in Albany. Construction of residential units is accelerating in the long-depopulated downtown. The local MPO is finally studying removing the eyesore that is the waterfront I-787 freeway. I kvetch a lot, but there are a lot of really lovely things about living here.

At the same time, in over two years of living here, it’s become increasingly clear that Albany is facing a tipping point in terms of its ability to be a city. The city is facing a serious budget crisis, precipitated in no small part by the vast amount of city land taken entirely or mostly off the tax rolls because of institutional use (colleges, hospitals, state offices) or because it’s culturally believed to be valueless (all that parking). All Over Albany recently asked why people in this region are so determinedly pessimistic about everything.  For the city itself, I think, a lot of that has to do with the city’s inability to believe in itself as such. Decades of thinking about Albany’s most urban areas as little more than a destination for car-bound commuters have left the city without a self-image as an urban place–and without that self-image, Albany is left adrift in policy and purpose, unable to plow a clear path forward.

The Choice, or Not

I began this piece by framing Albany as facing the choice to adopt what Chris Leinberger calls the “option” of urbanism. But perhaps that’s not quite the right framework. The way I see it–and, admittedly, I’m an outsider, but one with the valuable perspective of having lived in numerous different places–Albany doesn’t really have that much of a choice. 60 years of being squashed by the suburban attitude, some of it self-adopted, has left the city constantly facing financial crisis, with its downtown just now recovering from being wiped out,  and with an entrenched classist, racist mentality that prevents urbanist improvements from getting done. Like many American cities, Albany’s tried suburbanism, and like most other places, it has failed. The option, such as it ever was, is no longer extant. It’s time for urbanism.