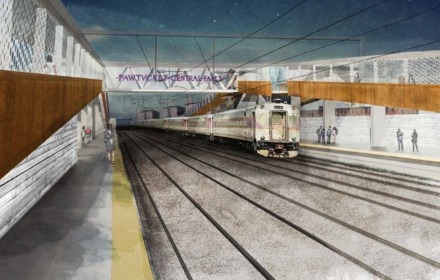 My post from last year about the woes of Rhode Island’s Wickford Junction park’n’ride investment enjoyed a brief renaissance last week when Streetsblog linked back to it. How convenient, then, that Wickford Junction was in the news again this week when Rhode Island state legislators used it as a reason not to provide state funding for the (probably much more useful) long-awaited infill station in Pawtucket/Central Falls.

Let’s get one thing straight: Wickford Junction and Pawtucket/Central Falls are completely different scenarios. Pawtucket has regular service throughout the day (albeit at crappy frequency), while Wickford Junction…doesn’t. And then there’s this: 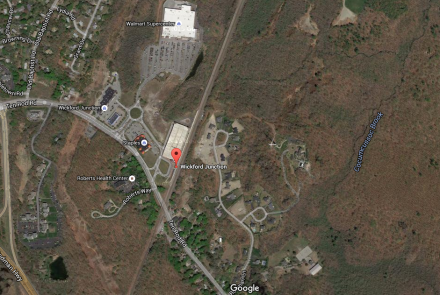 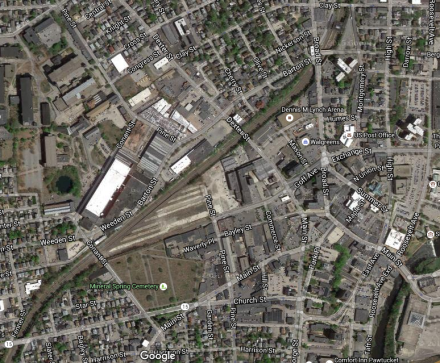 Wickford Junction is completely cut off from development of any kind, while Pawtucket station would be located in one of the densest areas in all of New England. Comparing them, in other words, is pointless at best. No wonder Providence blogger Jef Nickerson, in his own words, “went ballistic” when the legislature approved funding for a garage in downtown Providence after ignoring the train station.

I want to dig a little deeper into this, though. Let’s consider quotes such as this, from Patrick Anderson’s Providence Journal article linked above:

The free-market Rhode Island Center for Freedom and Prosperity has put the station plan in its cross-hairs, adding the funding bill to its “five worst” list for the year and saying it aligns with a “submissive philosophy” that Rhode Island should be considered a suburb of Boston.

When framed this way, the critique not only becomes more sympathetic, but reminds me of another anecdote I turned up in the process of researching my master’s paper. When the Providence Foundation studied intrastate commuter rail from Woonsocket to Providence in 2009, the project team met with planners along the route to gauge interest in the potential new service. All showed interest, except for the town planner in Lincoln, where a station was proposed in the hamlet of Manville. The reasons given were fascinating, and a little bit sad:

The proposed Manville site is located near a low-income neighborhood, where residents could typically be expected to benefit from additional transit services. However, commuter rail – with its peak-oriented services – may not be a good fit for these residents who tend to work at jobs with nontraditional schedules. Moreover, the town planner in Lincoln indicated the most town residents were not interested in a new commuter rail station. (p. 71)

Justifiably or not, Lincoln’s town planner believed that commuter rail, as a mode, is not for “us” (us being anyone working in a job that is not white collar or 9-to-5). That’s not too far off from the idea that investing state money in a commuter rail station would only increase Rhode Island’s dependency on Boston, if we assume that “Boston” here stands in for white-collar jobs with little access for middle- or working-class Rhode Islanders. It may not be entirely apparent to the people I’m quoting here, but I believe the pattern indicates the very tiny glimmer of a kernel of a coherent, trenchant critique of the commuter rail paradigm.

Rhode Island has ambitious plans for commuter rail, both expansion of Boston-oriented MBTA service and intrastate, not to mention random private ideas for Providence-Worcester service. That’s admirable for a state of Rhode Island’s size, and the Providence Foundation study projected very positive results for Providence-Woonsocket service. 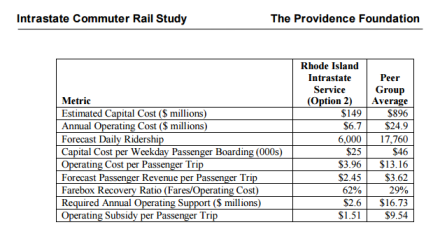 Projected costs and operational figures from the Providence Foundation study

That being said, I think the difficulty of gaining political traction for commuter rail in places like Pawtucket (which has been waiting for a station for decades, since its legacy one closed in 1981) and Lincoln reflect both the normal anti-transit animus of certain groups AND something deeper and more profound.

I devoted much of my master’s paper to developing the idea that American commuter rail has been socially and politically constructed as a luxury mode of travel for the middle and upper classes, one that serves only a niche subset of trips. In many other countries, mainline rail systems–often branded “regional”–operate frequently all day and on weekends, allowing use for numerous kinds of trips to numerous destinations. Perhaps, to build political momentum and promote a system that can be truly useful to a broad swath of Rhode Islanders, state leaders should consider something not less, but more ambitious–a regional rail system along the lines proposed by Peter Brassard over at Pedestrian Observations several years ago. Maybe  even that wouldn’t quite redeem Wickford Junction–but it might be the only plan that has a chance to.

Last week, New Jersey governor Chris Christie made headlines (in a small segment of the population at least) by poo-pooing entreaties to extend the Camden-Trenton River Line to the Statehouse, telling riders to “Use Uber” instead.  Now, the River Line is seemingly mediocre transit; despite forming a strategic link between two depressed cities, and connecting to strong transit options on both ends, its farebox recovery is atrocious (although it has shown some returns for the region).

That being said, it’s clear that the River Line’s Trenton terminus is in a less-than-ideal location. Although it connects well with SEPTA, NJT, and Amtrak trains, I think it’s fair to assume that most River Line riders are local, rather than making connections to destinations along the Northeast Corridor. And to reach many of the government jobs in downtown Trenton, those riders will have to walk a decent distance or transfer to a collection of buses branded as “Capital Connection.” 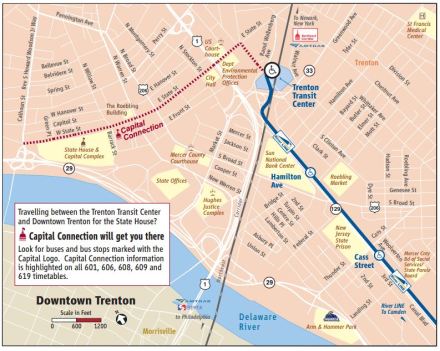 The Trenton Transit Center is on the far eastern end of the heaviest job concentration in Trenton.

So: even if the River Line is mediocre transit, extending it a few more blocks into downtown Trenton isn’t a waste–it’s a key network connection that holds potential to be highly useful to lots of riders. And that’s where my take on the potential extension differs from Gov. Christie’s. Where the governor sees a question of expanding an underperforming transit system–that is, in a sense, rewarding underperformance–I see an attempt to redeem that same system with a relatively minor expenditure based on the principle of network connections. Indeed, is it possible that the statehouse connection could be the key to unlocking the River Line’s overall potential?

Much the same logic has been at work in Massachusetts, where Governor Charlie Baker has posed a dichotomy between “core operation” and “expansion,” as told to Politico:

“It just so happens our capital investment is in its core operation and not in expansion. But we see what happens when you spend all your money on the shiny new thing and forget about the fact that you have a core system that you need to invest in, to maintain, to enhance, and to modernize”

Baker’s commitment to this dichotomy has played out mostly in his administration’s skepticism toward the Green Line Extension into Somerville and Medford, and to a lesser extent on the North-South Rail Link. Baker has a point, of course, that MBTA and the state of Massachusetts have shown little capacity for effective project management, and there is a crying need to fix the maintenance and State of Good Repair backlogs facing the existing system.

But, like Christie, Baker fails to understand that the Green Line Extension and NSRL represent not “expansion” for its own sake but targeted infrastructural investments on the principle of building a transit network. Indeed, NSRL would enable the transformation of the MBTA commuter rail system from a collection of disconnected dead-end lines into a real network. In the dichotomous lingo that has taken effect in Boston, NSRL represents neither reform nor revenue, but reform through revenue (or really, investment), which, when needed, is the core logic of network-based thinking. It would take the system from this: 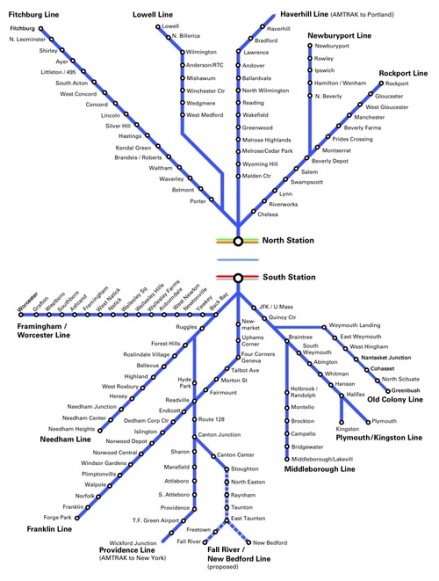 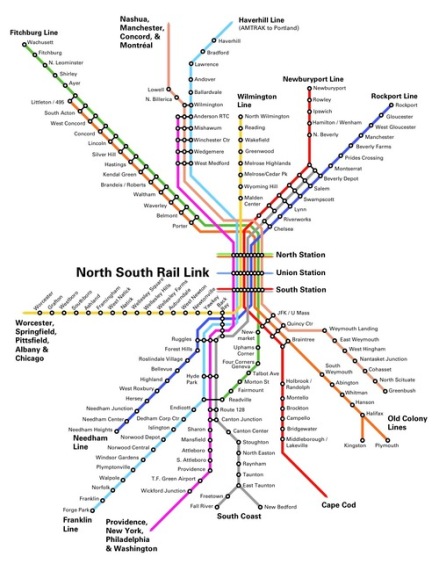 One vision for a post-NSRL network, from the NSRL website.

To illuminate the conceptual challenge in convincing politicians to think in terms of networks, let’s turn to Jarrett Walker’s well-timed (for my purposes!) post from yesterday on core vs. edge debates. Of course, core/periphery fights are not precisely the same issue as opposing “expansion” that actually represents a key network link–but both represent a failure to think in terms of networks. In Jarrett’s words:

Once more with feeling: Transit is a network, which means that its parts are interdependent.  You cannot think about it the way you think about libraries or fire stations, where putting one in a certain place clearly benefits the people there, because the whole network affects everyone’s ability to get everywhere.

This is the key concept that, it seems, Christie and Baker have failed to grasp. Certainly, there are transit expansions that benefit only a discrete set of people within a region; many (politically popular) commuter rail and light rail extensions into low-density areas fall into this category. But many “expansions” have utility well beyond their own immediate area. The key is for decision makers to be able to differentiate between different kinds of “expansion”–and, in fairness to Christie and Baker, the political incentives are largely set up to make this differentiation hard.

Politicians face pressure to “give” everyone (that is, all geographic areas) benefits from government spending, which–and this is where we return to the parallels with the core/periphery problem–incentivizes spreading money around inefficiently rather than investing in geographically central yet regionally (networkily?) beneficial links. Would Christie or, especially, Baker, be more willing to risk some political capital on an “expansion” if it were seen as a key network link rather than a luxury whose benefits accrue to one particular area? Maybe, maybe not. But those of us with a stronger grasp of the concepts behind the transit can work on educating, those nonspecialists whose first instinct is to respond to the loudest voices.