I’m aware this blog has been too damn quiet lately, and while I know there’s no excuse for my failure to provide quality content, I’m here now to offer, at least, an explanation: I’ve been spending a lot of time applying and interviewing for jobs, most of which have required travel somewhere, well, other than Albany. It’s been a wild ride and while I’ve had both fizzles and opportunities along the way, it’s taken a while to find the right fit.

Anyhow, now that phase is over.

The Itinerant Urbanist (I keep telling you, the name of the blog isn’t for nothing!) is back on the road—and, what a shock, once again to someplace new to me. Effective January 15th, home base for this blog will be Boston, where I’ve accepted a position as a Transportation Planner and Unified Planning Work Program manager with the Central Transportation Planning Staff, the staff to the Boston Region Metropolitan Planning Organization. I’m excited about both the professional challenge ahead of me and the opportunity to move back to a somewhat larger city—while I do wax poetic about the virtues of midsize city living, there are real advantages to being someplace larger.

I’ve had the luck to count on professional and social contacts among Boston’s large and talkative transit/urbanism Internet community, and I look forward to getting to know more of you in real life. You probably won’t see me commenting on Boston-region stuff too much here or on Twitter—because, you know, professionalism—but know I value the perspective on the region you’ve given me and will continue to help me develop immensely. And I will, presumably, get back to writing on other topics in this space more regularly when my life calms down.

A few weeks ago someone asked a series of questions about where people would like to live, among other things, on Twitter and Urbanist Twitter had a lot of fun with it. My answer to the question of my favorite American cities, ironically, did not include Boston:

Thought about this for a while. Gotta go Philly. Other possibilities include Chicago, Portland, Seattle, Madison. https://t.co/BhOXpdhkI9

but rest assured that I am super excited to have found a decently priced apartment a two-minute walk from the Orange Line (Green Street in JP, to be exact), which will be the closest I’ve ever lived to rail transit, or any transit that frequent. My partner’s from Boston and I’ve spent a fair amount of time in the area, so in that way it’s a return home of sorts, but there’s enough mystery left that I’m looking forward to discovering yet another place afresh.

That being said, since it became clear that I’m moving to Boston it has felt, in some ways, fated. While home cleaning out my bedroom in Chicago over Thanksgiving, I found a memento that I had not remembered owning—a laminated poster with a 1915 map of the Boston Elevated Railway transit network on one side and a 1912 map of all the street railways in Massachusetts on the other. Bringing it back to Albany reunited it with my copy of this book on a similar topic. The poster will, I think, be going on my cubicle wall. A sign? Perhaps. 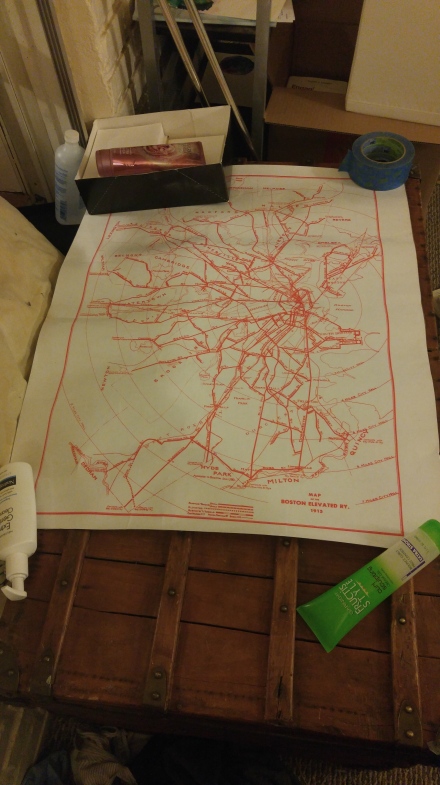 The Boston side of said poster.

It's a long way to Tipperary – and Newport, OR. State to mark start of longest hwy in US with Kenmore Sq. ceremony https://t.co/U9bzzQRzKC pic.twitter.com/IyeiaW37JP

While I have not (yet) traveled all 3,365 miles of U.S. 20, it does feel to a large extent like that road is the axis along which my life unfolds. My grandmother until recently lived only miles from its Pacific Coast terminus in Newport, which is a beautiful little town that I recommend visiting if you ever get the chance. I spent my high school years in Chicago, and the last 3 ½ in Albany; Route 20 runs through both cities. Our Albany apartment, in fact, is a block and a half from Madison Avenue, which hosts 20. So is it such a surprise that I would end up near the East Coast origin of U.S. 20? Perhaps not.

Because this is a serious blog, I’ll wind up here with some serious analysis. There’s been a long-term on-and-off discussion in the econ/planning/urbanist Internet community—starting even before the 2016 election made it a much-talked-about national issue—about what policymakers can do to help rural and disinvested communities and the people in them. It’s not uncommon to hear (and I’ve been guilty of thinking it myself sometimes) “well, why don’t they just move?” And sure, relocation is one potentially workable strategy. But more than anything else, preparations to make this move have brought home to me just how high the barriers can be to relocation in a high-cost area. We’re lucky that in moving from Albany—certainly not the worst off of Upstate’s major cities—to Boston our rent is ONLY approximately doubling, not tripling. And the amount of cash necessary to put down to secure an apartment is incredibly intimidating, even though Gabriella and I are both white-collar professionals with limited student loan debt and decent savings socked away. I don’t have a magical solution (and I might suggest that we shouldn’t necessarily be looking for such silver bullets) but we should have a policy of easy mobility, and we should think about how to make that happen.

SPEAKING OF WHICH, if you care enough about my ramblings to have read this far—my loyal, brilliant, and thoroughly professional partner Gabriella, who I followed to Albany and who is now following me to Boston—is looking for a job. Gabriella’s spent the last several years developing and managing a multimillion-dollar climate resiliency program for farmers in New York State and is open to any kind of environmental work. You know where to find me with suggestions, contacts, etc.

I’ve enjoyed meeting people through this blog for the last several years, and I hope to continue to do so going forward. Thanks for the company, and onwards.