Streetsblog’s 2014 Parking Madness challenge, documenting the ways in which American cities have sacrificed the vitality and financial viability of their downtowns to the gods of Suburbanites Driving In, concluded recently with Rochester, NY being named grand champion. That got me to thinking about one of the more remarkable aspects of my own Upstate city, Albany–that its biggest parking crater (the name given by urbanists to formerly vibrant urban landscapes eviscerated by the unquenchable desire for parking) isn’t downtown.

Oh, Downtown Albany has a parking crater alright, and it’s a doozy:

The roughly triangular building at the lower right hand side of the crater is the city’s armpit, its depressing Greyhound station. I-787 runs along the eastern edge of the picture, and the ill-fated and entirely unnecessary South Mall Arterial runs across the lower part of the picture.  The landscape may be bleak, but at least some of this land is slated to become part of Albany’s new convention center (a, shall we say, interesting project in its own right). And sadly, downtown parking craters are part of American life, for now at least.

One parking crater, though, isn’t enough for Albany. A couple of miles away from downtown, in an area labeled on city maps as “University Heights,” the land around a number of medical and educational institutions has been turned into a vast sea of concrete and metal whose scale can only be appreciated by zooming out:

Unlike the typical downtown parking crater, to the best of my ability to tell this one never wiped out a gridded streetscape. Owned by Albany Medical Center, Albany Law School, the state and federal governments (there’s a VA hospital and at least one state agency building), Sage College, and various other institutions, as far as I know the land simply remained unoccupied as the city developed around it until the various institutions were built in their present forms from the 1950s onwards. Via @albanymuskrat, the area once looked like this: 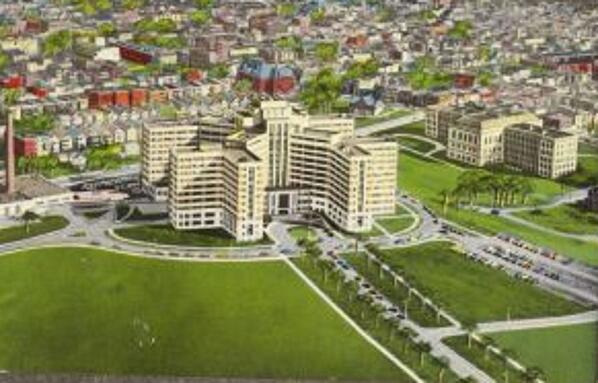 The city’s institutional land-ownership map provides a sense of the complexity of ownership in the area:

Though a coherent region within the city, the area is owned by a variety of nonprofit institutions with little responsibility to the city itself. Albany Medical Center, the only Tier 1 trauma center between New York City and Montreal (Albany has a lot of “The only X between New York and Montreal”), is the dominant institution, and it brings hordes of drivers from the suburbs onto city streets every day. AMC’s property holdings have also advanced into the city fabric, resulting in an old-style urban renewal plan for several square blocks of the Park South neighborhood just to the north. Yes, we’re talking “rip out dozens of old buildings and replace with new ones, including a huge garage.” I mean, ok, the proposed buildings look kinda New Urbanist, but I thought we weren’t doing that kind of shit anymore.

What makes the Park South project even more galling is the presence of so much other essentially empty land around AMC and its sister institutions. If anyone were able to unite land-use planning for all of the parcels now used as parking, AMC could avoid ripping out old buildings in Park South and share with the other institutions an enormous parking structure (if it’s even needed!) that’s nowhere near residential areas. Instead, it appears that the city has declined to force the various institutions in the area to cooperate, and instead allowed institutionally individualized, and therefore wasteful, land-use plans to go into action.

But let’s think bigger than that. Imagine if instead of being a single-use, dead-at-night parking wasteland, this area around some of Albany’s most vital and vibrant institutions could be transformed into a mixed-use real neighborhood? The opportunity exists. Let’s introduce a street grid into the area. Let’s turn some of those parking lots into apartments and condos, so that the doctors and nurses and support workers who work at AMC can roll out of bed and stroll to work and don’t clog city streets with their cars. Let’s make a real, productive, neighborhood, with taxpaying businesses and citizens, in a city that desperately needs it. Let’s integrate the institutions of University Heights into the neighborhood framework around it, as Pittsburgh has managed to do even as the University of Pittsburgh Medical Center became the region’s dominant economic force: