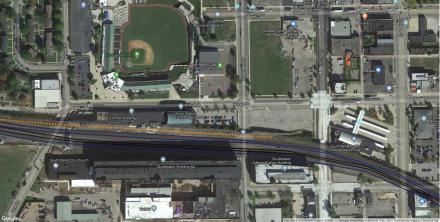 I’ve written before about how the country’s last interurban, the South Shore Line, could play a larger role in the transportation network for Northwest Indiana and beyond. The City of South Bend apparently feels the same way, and recently commissioned a study from AECOM to examine the possibility of rescuing the South Shore’s eastern terminus from its 26-year purgatory at the South Bend Airport.

The South Shore, as befits its interurban heritage, once terminated on street trackage downtown, but has long since been cut back, first to the current site of the South Bend Amtrak station, and then via a circuitous route to the airport. A marginal Midwestern airport makes a kind of silly terminus for a reasonably frequent commuter line, and while downtown South Bend isn’t exactly booming, it’s not in the worst shape relative to many Midwestern cities. It’s also got a progressive, pro-business, ambitious mayor with a certain determination to make his name on a national scale. So it’s not surprising to see some kind of reexamination. The question is whether South Bend and the South Shore can get together to do the right thing–and at the right price, because South Bend is still a cash-strapped quasi-Rust Belt city.

And there is a need to get it right–because, to put it mildly, not all of the analyzed station locations are of equal quality.

According to the study, none of the station alternatives offers a decisive upgrade over the others in terms of travel time or projected ridership at commencement of service. So the question comes down to cost/benefit ratios and core planning principles such as ability to promote development; walkability of the station area; and connections to other transit services. AECOM has laid out the projected costs in fairly neat form.

Table from AECOM showing costs and complications of each station alternative

“Property acquisition for approach” perhaps belies some of the difficulty of the Chocolate Factory location; it would require takings, which can be difficult politically. The Amtrak, and to a greater extent the Downtown locations, require negotiations with the freight railroads, but room exists on the shared right-of-way to extend the South Shore tracks. Presumably as a result of its relative complexity–construction in an active railroad environment is expensive, particularly when Class I extortion is involved–the Downtown alternative also has the highest associated costs.

Still, the costs associated with the Downtown alignment seem too high. The AECOM report estimates a total of $60.5 million for construction, with soft costs and contingency adding another more than $40 million. While the line would need to be electrified, we’re talking an extension of just under three miles, the first mile and a quarter of which, as far as the Amtrak station, already has track and electrical infrastructure in place, although it would need to be rehabbed or rebuilt as it hasn’t been used for passenger service in decades. While NS would presumably demand significant compensation for use of its right-of-way, at least one trackway is clear and available for use all the way from the Amtrak station to the old Union Station site; given the short distance and that NICTD service isn’t all that frequent, a single-track approach and a single-platform, two-track terminal is probably perfectly sufficient. Done cheaply, three route-miles of track and electrification, plus one platform, should probably cost $30-$40 million, not $60 million, much less $102 million. 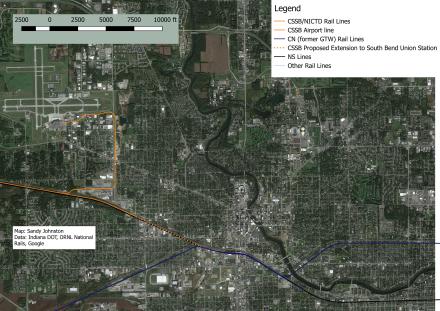 Overview of the core of the rail network in the South Bend area.

The “Downtown” location at the old South Bend Union Station, while not perfect, is pretty good. The “old” South Shore, as befits its interurban heritage, rolled right onto the streets and terminated downtown, around a mile from Union Station (which served the New York Central and Grand Trunk).

The old South Shore on the streets of downtown South Bend. Source: https://thetrolleydodger.com/2016/06/21/night-beat/

But the attractive Art Deco Union Station building is still there; a new minor league baseball stadium has been built across the street; and most importantly, the local transit system’s major bus hub is one short block away. Oh, and there’s lots of land to redevelop in the immediate vicinity; in a slow-growth but not hopeless case like South Bend, that’s a big deal (and, if we’re being honest, what makes the whole thing attractive in the first place).

As the graphic makes clear, the development potential of the Union Station/Downtown location blows every other alternative out of the water. And that’s not even counting its significantly greater potential for multimodal transportation connections. Put bluntly, South Bend has a choice between making the choice American cities have been making for decades along “commuter” rail lines–sticking stations in a quasi-suburban location on the cheap, with plenty of parking–or making a choice to anchor a truly urban redevelopment strategy that relies on multimodalism, TOD, and strategic redevelopment possibilities.

Luckily for South Bend, Mayor Buttigieg seems to be leaning toward supporting the Downtown option, but some powerful forces–such as the airport’s leadership–are trying to move the future station’s location in a more suburban direction. Given the economic potential–even exaggerated as such analyses almost always are–and transportation benefits, the Union Station site is almost certainly the correct one, even at a higher cost. But to get it done, cost control is key. The city has already authorized $25 million in spending, which would only get the entire project done if South Bend turned into Spain overnight, but given limited federal commitments–the South Shore’s double-tracking project is one of those whose grants the Trump FTA is inexplicably withholding–the more of the project local funds can pay for the more likely it is to get done. According to the South Bend Tribune article linked above, Buttigieg seems to believe for some reason that a Union Station location would “likely require vacating South Street along the south side of Four Winds Field,” which seems rather unnecessary to me. Presumably, someone has told the mayor that building a brand-new alignment over a city street would be easier than dealing with NS and CN and relocating some HVAC equipment that currently occupies the empty trackways behind the Union Station building; but this seems unlikely in the extreme.

Plenty of room on that viaduct for a few more trains.

The mayor should enlist some allies at the state and federal levels and play hardball with the Class 1s on the right-of-way issue. This could be a very promising project for South Bend and for the South Shore–but the way forward won’t be clear unless the whole thing can be competently managed and brought in at a reasonable price.