In the wake of massive cost overruns piled on top of already absurd costs, the State of Massachusetts has made it clear that fully canceling the much-delayed extension of the Green Line into Somerville is on the table. The challenge remains that the state, as Conservation Law Foundation attorney Rafael Mares makes clear in the WBUR article linked above, is under a legal mandate to build the Green Line extension (GLX, as it is popularly known) stemming from a CLF lawsuit over air quality impacts of the Big Dig project. The state, for its part, insists that should they choose that course, substituting another project is fully legal. 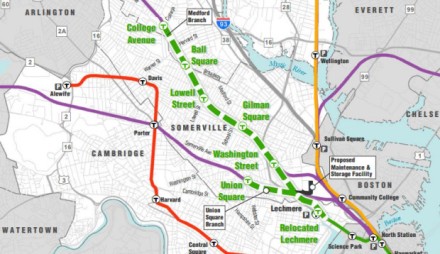 Map of GLX, via WBUR and MBTA

Let’s turn to the full text of the agreement (here, section 7.36). First, we see that GLX was supposed to be open already (and this is a revised, 2007 agreement after earlier delays):

So much for that. The agreement says that the state is supposed to provide interim air quality improvement options in the meantime, but who knows if that’s really happening. What happens if the state decides one of the legally mandated projects isn’t worth building?

The two primary requirements for substitution are that the substitution project a) cover the same municipalities that GLX would benefit and b) would provide 110% of the air quality benefits. The latter shouldn’t be particularly hard to achieve; air-quality benefits can be somewhat fungible. The former is more challenging, and complicated by the ambiguous wording of the legal document: does a substitute project need to serve all of Boston, Cambridge, Somerville, and Medford, or just be located in one of those municipalities? It’s not hard to imagine that that ambiguity could become a point of conflict between GLX advocates, CLF, and the state.

IF the state decides to cancel GLX–and just to be clear, I’m not advocating for that, this is more of a thought experiment–what are the options? For a baseline, GLX is expected to carry 45,000 riders per day by 2030.

This has been an open topic of discussion on Twitter over the last couple of days. Here are some of the ideas that have popped up (but don’t take any of this spitballing as evidence these people support cancelling GLX):

One of the major complications of GLX is that it uses existing right of way used by MBTA commuter rail trains. So naturally, one of the things to think about is whether the existing tracks could be used more efficiently. Eitan Kensky has been pushing for frequent Diesel Multiple Unit service on the existing tracks for almost a year.

@ofsevit @jbonsey17 other option for that ROW: DMU to Waltham. New stop at Alewife

@sandypsj but then there's the ? of a third track to Waltham (ROW is there), DMU service Union-Porter-Alewife-Belmont-Waverley-Waltham?

@ofsevit at this point, substituting DMU to Waltham for the entire Union Square branch might not be the worst idea.

@ofsevit @sandypsj I did up a quick mock-up, also added a station at Beaver St in Waltham and Park St in Somerville https://t.co/LJbGwA3dUl

DMU service would be relatively lightweight–a few new platforms (the temporary, wooden kind would be fine at first), a few new trains, and some operational procedure changes. The last point, of course, is a sticky one–it’s hard to trust MBTA to manage anything correctly.

@sandypsj No, because the DMUs would be used horrendously inefficiently.

Everything Except New Trains!

As Andy Monat points out, there are plenty of things that could be done to improve non-automobile modes in the Cambridge-Somerville area without building new rail.

A complete buildout of protected cycle infra in Camberville would cost a fraction of #GLX & carry more ppl. Do that! https://t.co/jG3W1Puyq5

At the price point GLX currently occupies, the same investment could make major progress towards turning the MBTA commuter rail system into something much more useful. Electrification of the Lowell Line and part of the Fitchburg Line (say, out to Waltham) shouldn’t cost more than $160 million combined, plus a few hundred million more for rolling stock–relative peanuts compared to the $3 billion GLX would currently cost. A few infill stations in Somerville and Cambridge, and you’re in business.

There’s also the multi-billion-dollar elephant in the room: the North-South Rail Link. It’s a project that divides Boston-area transit advocates. Many see it as a megaproject that would take away capital investment from more fundamental needs. Others, including me, see it as having the potential to transform the current limited, inefficient, and inequitable commuter rail system into something much more modern and useful to the Boston metro area–but only if it’s accompanied with modernization of the entire commuter rail system.

NSRL is a relevant topic of conversation right now because a new coalition, associated with former governor Michael Dukakis, has just launched a campaign to get the tunnel built, complete with a fancy website. 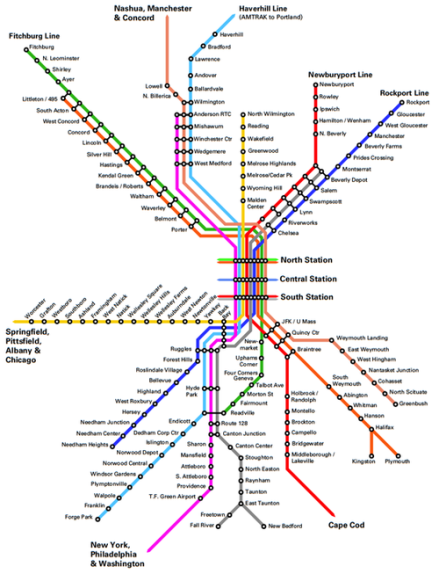 The new NSRL service plan, from the coalition website

The irony of NSRL, of course, is that had it been completed as part of the Big Dig project 20 years ago, as originally planned, it might have eliminated the need for GLX entirely. Had NSRL gone forward, and the commuter rail system been turned into a rapid transit system, building GLX on the same ROW might have been entirely redundant. Of course, one could go back even further and say the same of the Red Line extension to Braintree and the Orange Line extension to Oak Grove…but there’s a sad thought.