Earlier today, @AlbanyMuskrat, one of the numerous high-quality Twitter accounts that chronicle Albany’s history, sent out a picture of a trolley along Central Ave./Route 5 on the border of Albany and suburban Colonie:

I’d known that for several decades a Schenectady Railway Company (full system map here) interurban line connected Albany and Schenectady along Route 5, part of the Capital District’s extensive former network of interurban lines. I hadn’t, however, previously seen a picture of the exact way the tracks were arranged vis-a-vis the roadway. I’d kind of just assumed that since the Albany-Schenectady road has been well trod since the days of the Erie Canal and earlier, the trolley tracks had been unassumingly stuffed in dirt next to the roadway, as so many interurbans were. But no: here is a high-quality double-track right-of-way, taking up equal-and-separate space with the road. Here’s the same view today:

Central Avenue today, still the vital artery connecting Albany and Schenectady despite the presence of I-90, is much more heavily developed than it was in 1930; bridge in this view, carrying the former New York Central (now Amtrak) tracks over Central, marks the western end of a 1950s shopping development known as Westgate. The border between Albany and Colonie lies just a few feet beyond, and the rest of Central Avenue into Schenectady has taken on an identity as a typical suburban arterial, with shopping, a few lower-end motels, and a very few residential blocks that occasionally betray the area’s roots as a streetcar suburb.

But that road…formerly a balanced, shared right-of-way, Central Avenue is now a broad, high-speed (40 mph speed limit in Colonie that’s routinely exceeded) five-lane stroad dedicated entirely to motor vehicles. It is also–not coincidentally–frequently cited as the most dangerous corridor for pedestrians in the Capital District, with long distances between crosswalks rivaling high speeds as the most notorious factor.

@AlbanyMuskrat’s picture, then, sent me into a chase for images of Central Avenue as it was, rather than as it is, with particular focus on the one-time interurban railroad. Gino’s Trolley Page is the authority on all things railroading in the Capital District; the following pictures are his. 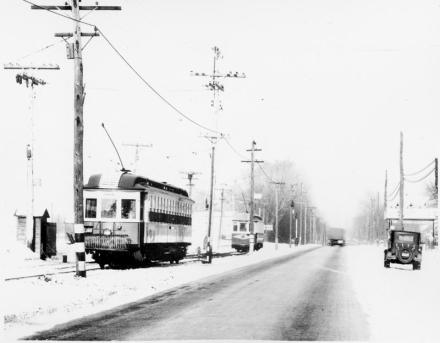 Gino’s caption: Here is the scene looking East on Central Ave. in Albany. The SRC track paralleled Central Ave. all the way to downtown Albany. Cars and trolleys would regularly race on this stretch of road…

I don’t know exactly where this picture was taken, so I won’t provide a modern view.

Gino’s caption: Here’s the waiting room and gates to the estate that is now Evergreen Cemetery. Stop 10 on the Albany line.

The same spot, in Google imagery from 2011 (note the same house in the background of both pictures):

Here’s the stop at Wolf Road: 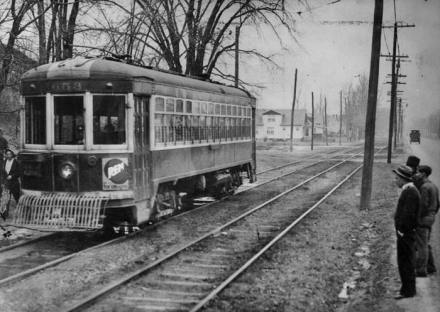 I don’t know exactly where the Wolf Road stop was located, but the area today has risen from obscurity to become arguably the retail center for the entire region, drawing in shoppers from the Adirondacks, Berkshires, and numerous other areas. The trolley stop was probably located somewhere on the far side of this intersection (looking south on Wolf Road in a T at Central; cars coming at camera are coming off of an offramp from I-87).

Here’s the area from above today:

The trolley tracks would have run along the southern side of Central.

I would also be remiss to not mention that there is one significant physical remnant of the interurban line’s presence in the suburban space between Albany and Schenectady, the beautiful former powerhouse near New Karner Road. Local blog-of-record All Over Albany profiled the building nicely here.

Now, the high-quality double-track exclusive right-of-way enjoyed by Schenectady Railway Company cars along Central Avenue outside the limits of dense development was not the whole story; the cars ran in mixed traffic once they entered built-up areas in both Schenectady and Albany. I present these pictures of the area’s transformation not to make the argument that the arrangement of interurbans and cars sharing a right-of-way was some kind of ideal arrangement, but to point out–as I often do–that the ways in which we develop our transportation and land-use policies are choices.

The Central Avenue corridor didn’t have to end up as sprawl; policymakers chose that outcome. They chose it by allowing a system that had provided fast, high-quality service between two midsize cities to be abandoned, and by devoting dedicated space that was originally reserved for non-automotive transportation for cars. Cars, as ubiquitous as they may seem today, were not the only historical reality; to destroy suburban transit and privilege them was in suburban Albany as elsewhere, a choice that was made, not an inevitability.

And here’s the kicker, in case you think we’ve made progress: a 1910 SRC schedule shows cars taking 50 minutes to traverse the line between State and Broadway in Albany and the terminal in downtown Schenectady. Today’s equivalent, CDTA’s bus rapid transit-lite service known as BusPlus, offers the same journey…on a schedule of 57 minutes.

3 thoughts on “The Transformation of Central Avenue/Route 5”