As I wrote in my take on Albany’s assets as a city, one of the distinctive things about the Capital District is its unique tri-city arrangement, with Albany clearly the dominant city but Troy and Schenectady each contributing to the area’s feel. In a little over a year and a half of living here, I haven’t spend nearly as much time as I should in the other two cities, perhaps speaking to a cultural disconnect between them (part 2 of my take on Albany coming this week!). I’ve spend a decent amount of time in Troy and very little in Schenectady, perhaps intimidated by the oh-so-long 25-minute drive (or the transit trip that takes longer now than it did in the streetcar era)…or more realistically, by Schenectady’s reputation as a post-industrial wasteland hostile to urbanism.

Well, today I spent some time there. Wanting to take advantage of the gorgeous weather (above freezing for the first time in God knows how long!) G and I took off to Schenectady for lunch and a brief walkabout. I can hardly claim that we got much of a comprehensive look, even around the small downtown area, but even the brief glimpse we did get proved informative. Schenectady is pursuing a promising route of downtown revitalization, which is beginning to show real fruits, but it’s got a lot more to do before it has truly re-learned how to be a city.

As in Albany, the core of Schenectady’s downtown is formed by a business district centered on a grand boulevard that slopes down a hill and is known as State Street. Though inarguably less impressive than Albany’s, Schenectady’s State Street–which slopes west toward the former location of the Erie Canal and the still-extant Mohawk River–is still intriguing, and a decent place to start an urban revival.

Looking up State Street from Broadway

Immediately behind the camera State Street dips beneath the CSX/Amtrak/Delaware & Hudson tracks and the platforms of the desolate (but soon to be refreshed!) Schenectady Amtrak station. Just beyond that is the intersection with Erie Boulevard, built over the former canal channel when the enlarged Barge Canal system opened. In other words, this picture gives you a sense of the proximity of Schenectady’s downtown to the area’s past and existing transportation assets.

Looking down State Street from near Lafayette

This is the upper end of the State Street strip, looking west from Lafayette street. Visible at mid-right is one of the centerpieces of the downtown Schenectady revival, the building housing Quirky. Quirky is a “social product development company” that relocated 180 employees to Schenectady last year, building on its partnership with GE (the once-and-still-though-diminished titan of Schenectady’s economy)…and on almost a million dollars in economic development tax credits and grants. It’s being touted as a keystone of the renewed downtown, along with Proctors theater (no good pictures here, sorry) and..

Mexican Radio is a somewhat upscale, hipster-oriented, veggie-friendly Mexican restaurant with branches in Greenwich Village, Hudson, NY (basically Brooklyn North, but actually), and, as of 2014, Schenectady. The restaurant is housed in a gorgeous, beautifully renovated old retail building on the corner of State and Broadway; my picture doesn’t do it justice, but you can see more on their website.

Oh, you ask, the food? Decent, a little overpriced, but I’d go back. Nice date spot. 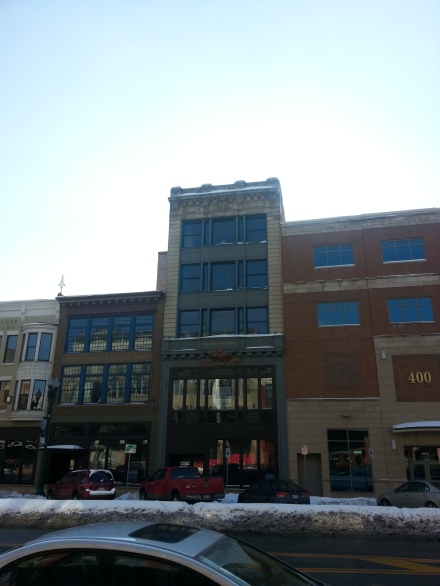 This building to some extent illustrates the challenges of downtown Schenectady’s not-quite-recovery. It’s a newly renovated, gorgeous specimen with a facade in cast iron, but at least one of the floors is vacant–and it was far from the only vacancy we saw.

Sorry for the glare!

This building houses the Parker Inn and Suites. I can only imagine the screams of “Out of context! Out of scale!” if someone proposed inserting it between its neighbors today.

The pedestrian mall of the vintage “Drive to me!” type

Branching off of State is the other leg of Schenectady’s downtown renewal efforts, the Jay Street pedestrian mall. It’s an attractive place for a pedestrian mall–a narrow street that wouldn’t make much sense for cars, with numerous little shops. But it’s marred, again, by high rates of vacancy and by things even more basic, such as the fact that the snow clearly hadn’t been removed for quite a while (a problem, indeed, all over downtown Schenectady). It’s hard to navigate around a pedestrian mall when one is slipping and sliding at every step. Also, signs to parking are omnipresent and serve mostly to remind why, as planners have now realized, pedestrian malls have largely failed in this country–it’s hard to maintain a vibrant street life when your patrons largely drive in from the suburbs.

Schenectady City Hall occupies the block bounded by Jay, Franklin, Liberty, and Clinton streets. It’s a gorgeous building with incredibly detail..and it was really clear that no one had bothered to clean the snow off the front steps. True, little city business happens on Sundays, and we had just gotten a few inches the day before, but wouldn’t one expect a city that takes itself seriously to make pedestrian access possible?

Another shot of City Hall. 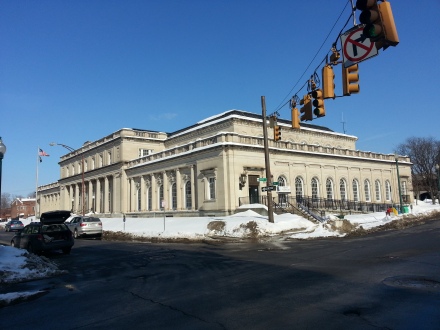 The post office next door to City Hall. Nice building too.

Hard to see, but that’s an Amtrak P42 sitting in the station amidst a sea of parking lots.

I’ll have to spend more time there when the weather is better, but it’s clear that there is some movement in long-moribund Schenectady. Progress is fragile, though. Quirky could turn out to be a bust. Mexican Radio could pack up and take its hipster cachet back Downstate. As things pick up downtown, the city and its merchants will have to take their urban responsibilities–things like making sure the damn sidewalks are clear–more seriously. Eventually, the city will have to overcome the inevitable resistance to building over the ring of parking craters that isolate downtown from the neighborhoods. And the city will have to manage the tension between downtown development and making sure its even-more-downtrodden neighborhoods get some attention. I’m not as bullish on Schenectady’s future as I am on Albany’s–there’s a hell of a lot of work left to do–but there’s definitely some hope.

3 thoughts on “A Lunch in Schenectady”