My home state (I lived in New Haven for 9 years as a kid) of Connecticut has been making some halting, slow positive moves towards better transit, and they’re starting to add up to something. All four tracks of the New Haven Line are close to being back in service after extensive work (except in the remaining three-track gap between Devon and Woodmont, see below); the Waterbury Branch may be getting signals and more trains; New Haven will soon have all-day half-hourly service to Grand Central Terminal; the CTFastrak busway between Hartford and New Britain should open in March; and the revamped, albeit imperfect, New Haven-Hartford-Springfield commuter/intercity service should roll out at the end of 2016. And now, Governor Dannel Malloy has come up with state funding for two more stations, the long-discussed Bridgeport Barnum and Orange, on the New Haven Line.

The utility or lack thereof of those two stations is up for debate, but I want to highlight another aspect of their addition to the New Haven Line. With the other two recent infill stations, Fairfield Metro Center and West Haven, there are now 21 stations (including the endpoints) in the 46 route-miles between Port Chester and New Haven, or on average one station every 2.19 miles. With the additions of Barnum and Orange, there will be 23, or exactly one station for every two miles. Though few trains make all local stops, that stop spacing is rapidly dropping toward that of a spaced-out urban rapid transit line, rather than a “commuter rail” system. And that, I think, offers a great opportunity to transform the New Haven Line into something unique in the US, an interurban regional rail system with a focus on moving people not just to and from New York City, but within Connecticut as well.

Here’s the thing about the Connecticut Shoreline region: while its economy and culture are intricately and inextricably linked to New York City, it is not a pure bedroom region. The region’s older cities–New Haven, Bridgeport, and Stamford–all have an economic identity and gravity of their own (though Bridgeport’s can be kinda hard to figure out), and Stamford has evolved into something of an Edge City, attracting corporations fleeing the costs of Manhattan and pulling in commuters from its own hinterlands. In fact, only a relatively small proportion of people living in the Shoreline region commute to New York City. 61.60% of employees in New Haven County work in the same county; Fairfield County takes second place with 16.10%, and only 1.10% of New Haven County employees, or 4,150, work in Manhattan; the other NYC boroughs and Westchester add about 3,000 people. Fairfield County follows the same pattern; 67.7% of employed residents work within the county, and another 9.2% work in New Haven County, with only 6.2%, or 24,086, work in Manhattan. 4.5% (17,514) work just across the border in Westchester County, and the other NYC boroughs have 0.4% each, or around 4,500 workers total. Full numbers (from Census LEHD data) are included here:

So, the Shoreline towns share closer economic links to each other than they do to New York City, but Metro-North’s rail operations are, somewhat inevitably, still quite NYC-centric. This is to some extent justifiable; people commuting to Manhattan from Connecticut are obviously way more likely to travel by transit than people commuting within the highly suburbanized Shoreline region. Yet, the Shoreline does have a core of transit-friendly, somewhat dense cities and towns linked along the New Haven Line, and it’s not just Stamford, Bridgeport and New Haven; Greenwich, Norwalk, Darien, Fairfield, Stratford, and Milford all have downtowns that are close to the train station and walkable or potentially walkable. The region also suffers from an insufficient transit system, aside from Metro-North (or including it, depending on who you ask!). Jobs, especially those in the service sector, are heavily suburbanized, making job access by transit for disadvantaged populations especially difficult. Given the close intra-regional economic links, and the close station spacing along the New Haven Line, using the trackage for frequent transit-like service makes a hell of a lot of sense.

Of course, I’m far from the first person to advocate this approach. Just to highlight one take, Alon Levy included the New Haven Line in his series on a regional rail system for New York on The Transport Politic. Rather than preserving an NYC-centric approach, though, I want to focus on the New Haven Line’s potential for intra-Connecticut journeys. The true difficulties of such a transition lie in operating practices and labor costs; the only capital investment I truly see as necessary is the replacement of the previous fourth track between Devon (the junction where the Waterbury Branch joins the main) and Woodmont interlocking, the only stretch that doesn’t currently have all four tracks active and electrified. That would also require the replacement of the NYC-bound platform at Milford, which sits on the former fourth trackway, but that platform is short anyhow and should probably be replaced. I’d also argue that, long-term, the New Haven maintenance facilities should be shifted to the old Cedar Hill freight yard north of New Haven, allowing all trains to run through both New Haven Union Station and the downtown State Street Station rather than turning, and opening the current land up for development. 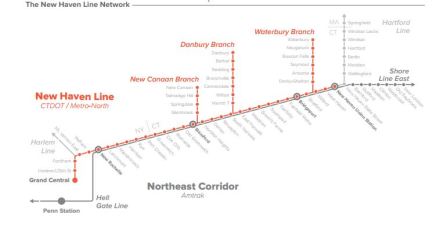 RPA/Getting Back on Track Report

In any case, running trains every 15 or 20 minutes shouldn’t be a problem even given current infrastructure; trains already run that frequently during rush hour. Though the half-hourly trains between New Haven and NYC are a start, I’d like to see those trains become what Metro-North calls “super expresses,” stopping only at Bridgeport, South Norwalk, and Stamford, with another 2 trains every hour running local between New Haven and Stamford and between Stamford and Grand Central. That would give the major stations service every 15 minutes all day, and considerably shorten running times between the major cities. Obviously, that’s just a start; I see no reason that once the four-track gap is closed and the signaling improved (and perhaps the power system improved some) the line shouldn’t be able to handle four locals and two expresses per hour.

There is one more element to my plan for improving transit along the Shoreline. Here in Albany, the local transit agency operates a successful limited-stop bus service, BusPlus, linking Albany and Schenectady along Route 5, the region’s major commercial axis. The buses, soon to be running every 12 minutes during weekday hours, have improved ridership in the corridor, cover the 15.5 or so miles in around an hour, carrying about 4,000 riders per day.

The concept of a limited-stop bus service linking close-together major cities along a major suburban arterial would, I think, be a perfect approach for transit supplementary to the New Haven Line along the Shoreline. The Shoreline even has its own counterpart to Route 5, the famous Boston Post Road (US 1). A tertiary through-route (since it parallels both I-95 and the Merritt Parkway) along the Shoreline, the Post Road has instead taken on an identity as the region’s main commercial drag. It’s a (fairly depressing) 50-mile-long cluster of mini-malls, full-scale malls, big-box stores, and the other stuff that accumulates along a suburban commercial arterial, but it does hit all of the region’s major towns, and intersects with the New Haven Line at multiple points.

Obviously the Shoreline is too long to be served by one bus service along the Post Road (and such a service would be redundant with the rail service anyhow), but I’d argue that splitting the stretch between Port Chester and New Haven into three segments makes sense. These links exist, to some extent, already, though they’re quite fractured; CTTransit operates (different) infrequent buses in both directions out of Stamford, Norwalk Transit operates a relatively frequent service (somewhat randomly) through Bridgeport to Milford, and CTTransit picks up again there. I’d like to see these services upgraded to an Arterial Rapid Transit standard, with signal preemption, turn and intersection pockets, nice stations, and fare integration with Metro-North. Split into three sections, each service wouldn’t be much longer than the BusPlus service, and though Post Road traffic is heavier than anything in the Capital District, the buses should be able to stay on time with decent scheduling and some signal help. The point of the buses wouldn’t be to carry people between the cities, but to distribute riders to local destinations from train stations, and to improve access to jobs along the Post Road from the urban cores. In essence, an ART system along the Post Road would be the local to the New Haven Line’s express service. Here’s a map:

The exact routings and boundaries of the bus services are only approximate. You could make the case that stopping a (long) block away from the train station in Stamford, rather than going right into it is good enough. Norwalk is also an awkward situation; should buses terminating there serve both the South Norwalk train station and downtown Norwalk? Nor have I accounted for the presence of trains coming off of the branches to New Canaan, Danbury, and Waterbury; and I’ve included a speculative re-routing of trains through downtown New Haven to turn at Cedar Hill. There are other infrastructure aspects of the line that need significant attention, especially the numerous movable bridges. But the overall structure, I think, is solid. The Shore Line Metro would be a relatively low-investment, non-capital-intensive way to create regionwide non-automotive mobility. It would involve service and fare integration between agencies, regional planning cooperation, and various other things American planning tends not to be too good at, but the payoff could be tremendous.

7 thoughts on “Towards a Shore Line Metro”