Though I don’t live in Chicago anymore, I still prize WBEZ’s Curious City, a series of in-depth research segments on questions submitted by listeners about Chicago and what goes on it. Generally, they do a pretty good job for non-specialists. That’s why it was particularly disappointing to read the segment from last week about bus bunching that essentially treated bunching phenomenon as inevitable, and somehow completely failed to consider the possibility of dedicating lanes to transit!

What was really disappointing about the Curious City piece is that everyone interviewed–from bus riders to academics to CTA drivers and officials–seemed to take the the fatalistic attitude that bus bunching is completely inevitable and very little can be done to prevent it. And in the current, auto-centric paradigm, that may very well be true. But it ignores the fundamental truth that, as with many elements of our transportation system, Chicago’s operation of a transit system prone to bus bunching is fundamentally a political choice. There is, in fact, one policy lever that can help the CTA (and other agencies) avoid bus bunching, but it is politically unpalatable to most actors, especially the city’s auto-oriented elite: dedicating lanes to public transit. And I have to say, unlikely as it is that the populace of Chicago will suddenly have a massive change of heart and decide that it’s worth dedicating lanes to transit across much of the city, it was irresponsible of Curious City not to even include the possibility of dedicated lanes in their report on bus bunching. True, no dedicated right-of-way can truly eliminate bunching, but buses having a clear path removes most of the obstacles that can lead to bad spacing.

The heart of the matter is that the choice not to give transit dedicated lanes isn’t inevitable, and isn’t an obvious choice when one considers the allocation of street space from anything other than what urbanists like to call the “windshield perspective.” Matt Yglesias articulated the way American cities divide street space for a non-specialist audience on Slate a couple of years ago, labeling it a “systematic over-allocation of public space in urban areas to cars.” His explanation is worth quoting at length:

A majority of the space on the public thoroughfare is set aside for the use of cars. And even though particular interventions—a bike lane here, a storage rack there—are certainly debated, nobody even begins to address this issue from a standpoint of first principles. Why would a city like Washington (or New York), most of whose residents don’t commute to work in a car on a daily basis, want to allocate its space in that manner?

It’s not impossible to come up with an answer. Perhaps the view is that automobile driving is associated with positive social externalities such that at the margin we want to encourage people to drive more and walk less. Or perhaps the view is that the goal of urban policy is not to maximize the welfare of city dwellers but instead to maximize the wealth of downtown landowners by facilitating suburbanites’ commutes. But there’s no explicit articulation of this view.

Though an overall majority of Chicagoans drive to work, there’s a strong transit-riding minority, and there are many neighborhoods where most commuters use transit. The choice to dedicate road space across the city nearly 100% to automobiles (the J14 has a few stretches of dedicated lanes on Jeffery Boulevard, and bus lanes should make their modern debut in the Loop sometime in the next year, with Ashland hopefully following at some point) is just that–a political and economic choice. As Yglesias says, the choice to advantage drivers (who tend to be wealthier and more politically vocal) as a class over transit riders is not explicitly articulated, and perhaps not always consciously made; but it is a policy choice that Chicagoans have made, and it is therefore (potentially) reversible. Remember, transit is far, far more efficient at using road space than cars: 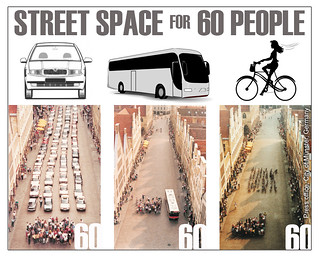 Is a network of bus-only lanes (whether it goes by the appellation “Bus Rapid Transit” or not) feasible in Chicago? Certainly, in the right corridors giving street space to buses can mean better flow of people, even if cars end up moving more slowly, and reallocation of street space is way more cost-effective than, say, subways. Chicago might be a challenging case, however. Chicago’s arterial roads are actually fairly narrow, at four to six lanes (including parking), meaning that dedicating lanes to transit for long stretches means either removal of all parking or taking away half of the lanes available to drivers–something that I might not be opposed to, but that might mean taking more road space than existing transit services can justify.

But there are places where dedicating more road space to transit is feasible and arguably the only moral choice. Take North Lake Shore Drive. With plans for the future of that roadway currently being made, its eight lanes carry 161,000 cars and 69,000 bus riders on the various express routes that use it every weekday. That means just about 30% of travelers on the Drive (or a little lower if we adjust for some cars carrying more than one person) ride transit. Surely the new Drive could spare one lane in each direction (25% of road space) to accommodate these users?

When the issue of bus bunching came up a couple of years ago Shaun Jacobsen wrote a useful post on the issue from a Chicago perspective. He suggests that while dedicated lanes may not be feasible across the network, there are particular choke points that delay buses where they might work. As a former rider of the 49 Western, I know I could suggest a few intersections where banning parking in the side lanes for a block or two on each side and allowing buses to “jump the queue” with signal prioritization would help reliability along the whole line: Lawrence, Irving Park, Armitage/Milwaukee, etc. I’m sure every Chicago bus rider has several such suggestions.

My point is: when someone who has taken the auto-centric world we live in for granted says something like “traffic IS unavoidable” (as was literally said in the Curious City piece), we should know better. 56% of all Chicago transit rides (in 2013) take place on buses. It’s time for Chicagoans and other citizens of American cities to get over our attitude that we can never do anything that might mildly inconvenience drivers and remember that there are things we can do to improve the lot of the city’s bus service. Chicago’s plans for Bus Rapid Transit in the Loop and on Ashland are a start towards a goal of fair reallocation of finite available street space, but it’s the unsexy tweaks around the edges that will really juice the city’s transit network. It’s time to realize the choices we’ve made and continue to make, and to make better ones.

8 thoughts on “Bus Bunching, Political Choices, and the Allocation of Road Space”