I have a habit of poking around on Google Maps for intriguing things in my spare time. Last night, I spent some time looking through a part of Chicago that I have noticed before, but never really researched. Scrolling around Chicago, it’s near-impossible not to notice the virtually empty blocks roughly bounded by Damen on the west, Roosevelt on the north, and the Pink Line L tracks and Paulina on the east, with the BNSF tracks marking the southern boundary:

Zoomed in a little, the area looks like this:

I decided to take the time to examine the area at street level, through Streetview. At street level, it’s impossible not to notice one thing about the area:

A little bit of playing around made it clear that all of the streets in the empty area have either old-style meters or the newfangled boxes:

What the actual #^%&? Who in their right mind would park here, especially when almost all of the institutions in the area provide their own, free parking? Why do completely empty streets have parking meters? And why the hell is this (former) neighborhood so devastated, when it’s adjacent to the L, two blocks from the city’s newest Costco, a potent symbol of gentrification, and only three blocks from the booming UIC Medical Center? (I have my frequent Twitter interlocutor @VamonosLA to thank for helping me develop these questions)

I took a dual approach to figuring out what happened to the area. The first step was to determine when the area’s decline set in. Aerial images from historicaerials tell a somewhat surprising story. What had been a typical-looking Chicago neighborhood–dense, and apparently full of two-and three-flats and a few single-family homes, had only declined sharply beginning in the 1970s. There were still a decent number of houses remaining in 1988, though it was clear that the neighborhood had been largely decimated:

There were even a few houses remaining in 1998: 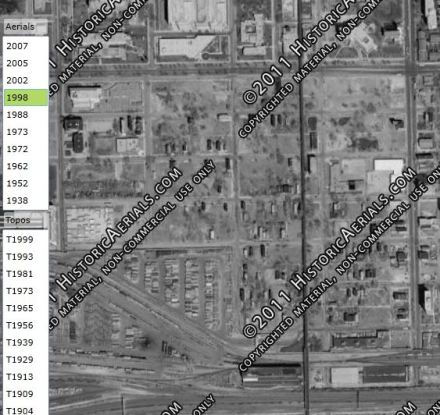 My working hypothesis had been that the land was cleared at the same time as much of Little Italy and Maxwell Street, when the university was developed in the 1960s. The aerial images told a different story; this neighborhood had been abandoned only gradually, and later than your typical urban renewal scenario.

The second obvious place to start in diagnosing what ails the area is to attempt to figure out the ownership of the land. This proved to be more of a task than I had anticipated. I started from the premise that the most likely; unlike Albany, whose city plan contains a handy-dandy institutional land ownership map, Chicago is far too large to have a comprehensive land-ownership map. I figured from the beginning of my research that the most likely culprit for the land lying fallow (so to speak) was that it is being held for comprehensive redevelopment by UIC or one of its affiliates; this turned out to be not too far off from the truth. UIC’s (HINT: 90 MB PDF. DON’T OPEN UNLESS YOU WANT TO WAIT A WHILE FOR A DOWNLOAD) master plan provided a hint that the university at least has plans for part of the space:

So, we know that the vacant land is slated for expansion of the medical complex sometime in the next 50 years (yes, that’s the time scope of the UIC master plan). An appendix to the UIC plan, however, told me that the land south of Roosevelt Road was currently the property of something called the Illinois Medical District. And with that clue, we start to unravel the mystery of what could destroy a neighborhood so thoroughly.

The Medical District, it turns out, is a little-known special zoning district intended to promote and develop the medical industry that has developed in the area over the past century, and develop the land in the area (ah, now we’re getting somewhere).  Governed by a board of seven commissioners, the IMD was established by the state legislature in 1941 as a gift to long-ago West Side congressman Vito Marzullo; according to a 1996 Chicago Reader article, the IMD “by state mandate has eminent domain within its boundaries; at any time it can buy as much land as it needs for ‘medical purposes.'” The IMD’s official history mentions one of these land purchases: “The 1960′s experienced the growth of Rush-Presbyterian-St. Luke’s Medical Center and the University of Illinois at Chicago Medical Campus, including a new University College of Pharmacy. During that period, the boundaries of the District were expanded to 14th/15th Street South of Roosevelt Road creating the “District Development Area” as an area of continued land acquisition and assemblage for future growth.” Ignoring the poor grammar of the previous quote, we now have an idea of what had happened to the area: acquired for “future growth” by the Medical District in the 1960s, it seems to have more or less languished and gradually slipped into nothingness since then, with the residents presumably being “encouraged” to leave.

The IMD’s map confirms that the vacant lots in the area belong to what it calls the District Development Area (an interesting note to this map: it appears that the IMD is in the process of applying for vacationing, or selling to private landowners, of the streets on most of these blocks):

What, though, is the communal history of what had once been a real neighborhood? What existed there before IMD took possession of the land? I uncovered a very useful Forgotten Chicago thread on the topic, which, in addition to the aforementioned Reader article, helps to flesh out some of the history. Once known as The Valley, this area was once, as late at the early 20th century, an enclave of Dutch settlement in Chicago. The area became heavily African-American starting in the 1950s, and IMD took possession of much of the land not long thereafter (according to their own account; the Reader article seems to imply that the term “District Development Area” is a creature of the mid-90s attempts to rid the area of its last inhabitants). The area gradually emptied of residents once IMD owned most of the land; IMD attorney Kenneth Schiewe told the Reader in 1996 that the District’s interest was in consolidating lots to create superblocks that would be attractive to developers, the idea being to compete with suburban greenfield development:

“We’ve torn down a lot of buildings,” said Scheiwe. “Every time you get rid of an abandoned building it basically improves the neighborhood.” The district argues that if it doesn’t acquire all the land that belongs to it by state law, it cannot attract developers to come in and start big-ticket projects. “Basically, having the assembled property is the inducement for the developer,” said Scheiwe. “When the developer comes and sees buildings sitting there, he knows the time factor involved, especially if those buildings are inhabited. He knows it will be a long time before he can begin construction. If we have an assembled site that is vacant he will know that we can begin almost immediately. Any steps where we can improve our position over the suburbs, we’re going to take. They can go out to Naperville and find a five-acre site, completely leveled. Knock down the corn.”

We can let the state of the area today speak to the wisdom of IMD’s approach.

There is also a very useful set of photographs of The Valley before it disappeared, taken by UIC grad student Lou Fourcher in the early ’70s and put online by his son Mike. I can’t figure out how to embed the whole slideshow here, but I might try later; in the meantime, click on the links. It’s worth it. And read the entire Reader article, too.

So what can we learn from the sad story of The Valley? First and foremost, probably, that urban renewal projects shouldn’t evict tenants from land until they have a definite buyer for the land, with financing in place and everything set. This may seem like a “no shit” kind of deal, but it hasn’t always been universal practice (far from it!) and the IMD clearly made the mistake of destroying an entire neighborhood without having a clear succession plan in place (that is, if you don’t consider destroying the neighborhood in the first place a mistake). Second, giving public powers–eminent domain and zoning, in particular–to a semi-private commission not accountable through the electoral process is probably a really bad idea. This, sadly, is rampant in Chicago.  Thirdly, closing local streets to create superblocks? Still a bad idea. Finally, the fact that this land is still sitting vacant after 40 years says something about the demand for land use in Chicago, as compared to the booming coastal cities. This land is transit-adjacent, near one of the city’s top employment centers and only a couple of miles from the Loop. And yet, there has been little to no demand fr it in recent decades. Chicago’s on the comeback trail, but (for better or for worse) the demand for land isn’t nearly as nuts as in New York or LA or Boston or San Francisco. On second thought, that’s definitely a good thing.

Oh, and what about those parking meters? No, I didn’t forget about them. As seasoned Chicagoans probably guessed immediately, they’re a legacy of that incredibly dumb parking deal the last mayor struck. I suppose we should give the city credit for stiffing the parking company like this?

6 thoughts on “The Valley: Anatomy of the Decline of a Chicago Neighborhood”