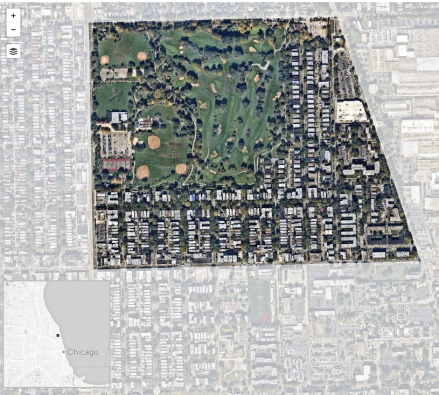 I’ve been enjoying messing around with Neil Freeman‘s latest gift to Internet urbanism, planning and nerdery, density.website and its accompanying Twitter bot, @everytract (if you haven’t encountered Neil’s work before, check out his site and especially his family of everylot bots).  While I posted some of my musings on Twitter earlier, I thought it might be a fun exercise to take advantage of this new, fun tool to tell the story of my (itinerant, after all) life through the Census tracts where I’ve lived–and maybe observe some things about American land use and life along the way.

Before we begin, it’s worth noting that, while it’s not Neil’s fault, the data contained herein is subject to the vagaries of ACS margins of error at small geographic areas. Which is to say, some of it might be off–but the general story is probably largely reliable. Tract boundaries can also change over time; the tracts looked at here are those that exist today, not that necessarily existed when I lived there. 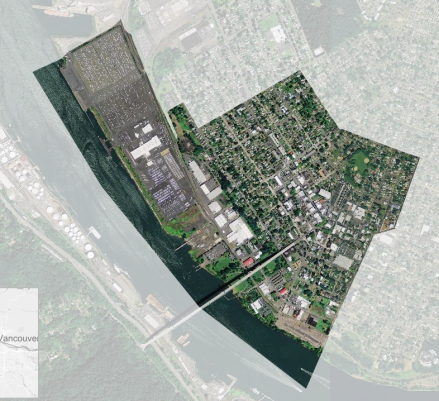 My dad spent most of his childhood outside of Portland and wrote his dissertation and resulting book about the city; I was born while he was finishing up grad school and we lived in the St. Johns neighborhood of Portland (ironically on Chicago Ave.) from the time I was a month old until I was three. Having been very little I have virtually no memories of this time, but I’m told my mother used to take me for rides on Trimet’s then-new light rail system around the now-abolished free fare zone in downtown Portland. Of note in the definition of this tract is that the overall density number is lowered by the fact that the tract includes a significant amount of port and waterfront land; it’s not the last time we’ll see this phenomenon.

My dad’s first academic job was at Buena Vista College (now University) in Storm Lake, Iowa. Having left when I was 6, there’s not much to say other than that it’s a small town in Northwest Iowa that smells like pork a lot of the time. The census tract covering the east side of town is huge and covers a lot of farmland too. 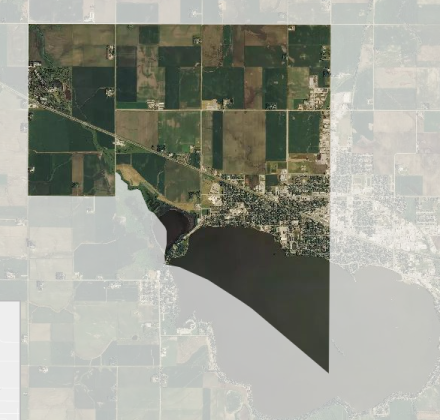 Moved across town. Very similar to the adjacent tract; but I wonder why the Census doesn’t group all of town in one tract and encircle it with others that cover the farmland. 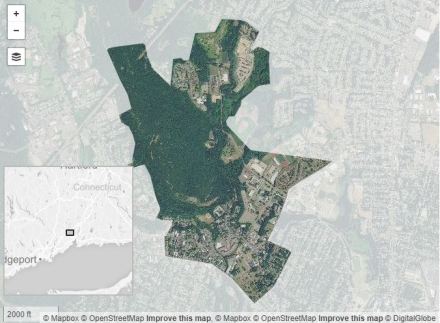 My family lived in the Westville neighborhood of New Haven from 1994 through 2003.  This tract actually covers a huge diversity of ground, from the small business district of Westville Village to Southern Connecticut State University, the public housing developments that the city tucked behind West Rock in the 1960s, and of course West Rock State Park itself, a touchstone of my childhood and a looming presence over much of New Haven. Of course, the state park means the native density of Westville’s streetcar-suburb (really horsecar suburb) feel is diluted in the tract-level density measure…but who really cares, it’s not a competition, right?

I spent my high school years and a year after college living full-time in the West Rogers Park/West Ridge neighborhood of Chicago. In addition to being a lovely, diverse neighborhood, this tract is a testament to the power of density; despite being largely taken up by Warren Park, the close clustering of three-flats, courtyard buildings, and other small-to-moderate scale multifamily buildings allows overall tract density to fill out at nearly 20,000 per square mile. Adjacent tracts without equivalent massive amounts of green space reach almost 30,000 per square mile despite the presence of a decent sprinkling of bungalows and other single-family types.

Well, they say Manhattan is unlike anything else in this country… 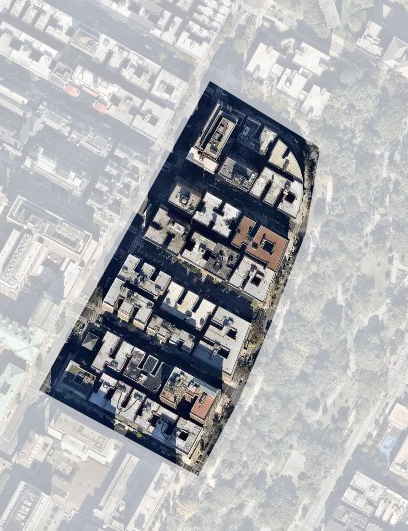 For the first two years of college I lived in a dorm on 120th Street between Amsterdam and Morningside Drive. The census tract covering this area is geographically tiny, only covering a few blocks, and most of the buildings it includes aren’t monstrous towers, but hey, this is Manhattan. It’s dense. Also, the view from Morningside Drive looking east over Harlem is spectacular, especially the couple of times I managed to drag myself out of bed to be there for sunrise. 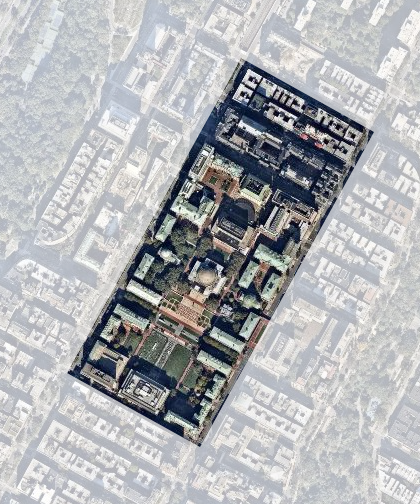 For the last two years of college I moved over to an apartment-style dorm at 121st and Broadway. It falls into a census tract that includes the main Columbia campus, so apparent density is much lower, but the built form of the residential buildings is essentially the same as in the previous tract. 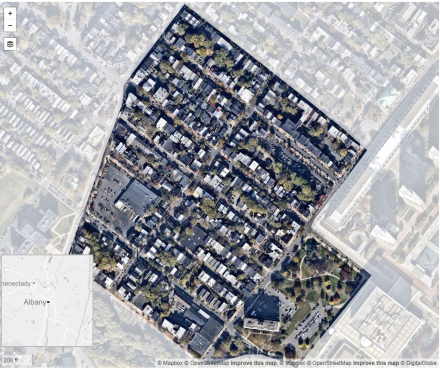 My partner and I lived in this rowhouse neighborhood (on the border of areas known as Center Square and Hudson/Park) near downtown Albany for 3.5 years. It’s a delightful area that’s quite dense but also leafy, with lots of nearby open space. It’s one of the few parts of Albany (and therefore of all of Upstate NY) where living car-free or car-light is feasible; we did have a car, since G needed it to commute to work, but in theory, this neighborhood can provide everything one needs–the big parking lot visible at mid-left in this view is the local supermarket, part of Schenectady-based chain Market32 (formerly Price Chopper). Like many American urban areas, this one bears the scars of urban renewal; the Empire State Plaza is visible at right, and the open space with a tower at bottom right was cleared during the process of the Plaza’s construction as well (the tower is now very cheap cooperative housing with a long waiting list). 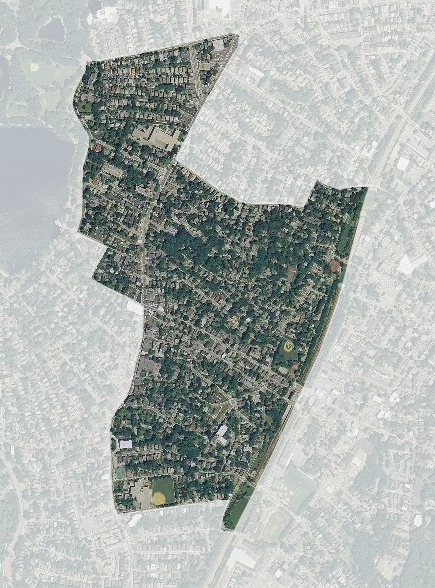 This oddly shaped tract covers much of Jamaica Plain, the neighborhood in Boston we moved to a year ago. The eastern boundary is the Southwest Corridor, carrying Amtrak, commuter rail, and Orange Line trains. The demographic data is in accord with the perception that JP isn’t really that dense; despite having rapid transit service (unlike my parents’ neighborhood in Chicago) the density measure comes in well below 20,000 per square mile. Aside from density, other demographic data tell a story as well:

JP is a largely wealthy neighborhood (and I bet the median income and especially the rent has gone up since the 2016 ACS data collection), that’s growing rapidly and not building much additional housing–in fact, since the era of urban renewal it’s gotten less dense in certain areas. Which, ultimately, leads to things like us getting gentrified out of our first Boston apartment so that it could be converted to condos (don’t worry, we got a nice settlement and found a very nice place). Which is how we ended up where we are now, in… 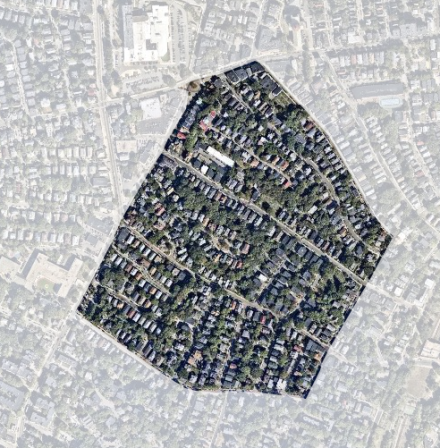 This small tract covers a significantly denser part of JP, from Spring Park Ave. over to streets covered with old worker and artisan housing such as Boylston and Paul Gore. Despite the density–in the 96th percentile of US tracts–it’s an incredibly green and leafy part of the city. 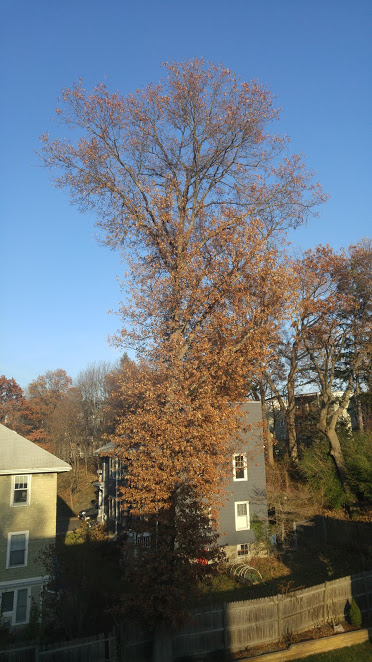 Seriously, how great is that? There’s just very little to complain about. Oh. Except the growth and rents issue, there is that:

So that’s Sandy’s life as told through census tracts. Thanks to Neil for putting the tool together, and I hope this has been a compelling (although perhaps unrepresentative!) tour of American built environment. It certainly lives up to the name of this blog (although to be truly comprehensive I’d have to examine data from Jerusalem as well!). I don’t have too many grand planning conclusions to draw, other than that very dense neighborhoods can be incredibly attractive and green (but we knew that). It is worth noting that the tracts presented here show that even that relatively small unit of measurement may be too big to yield accurate analysis at times. For transit planning, for example, street geometry and density immediately adjacent to the line may be more helpful than looking at tract-wide data. But that’s why even smaller data groupings exist! Or not.

One thought on “Sandy’s Life Through Census Tracts”