CT News Junkie reports that the Connecticut legislature is considering a pair of bills that would to some extent transform the paths of governance in the state. Writer Suzanne Bates frames the bills as a centralization of power in the hands of the state, which is a conclusion that’s hard to argue with, though I imagine many of my readers will not consider that a bad thing as she clearly does. The first bill concerns a couple of changes to the way the state administers taxes, but it’s the second one that we’re more concerned with here:

The second bill — House Bill 6851 — is also a power grab by state government. It would give a quasi-public state agency — called the Transit Corridor Development Authority (TCDA) — control over housing and commercial development around transit stops….

The bill has changed significantly since it was first introduced — for the better. Initially, the TCDA would have had the power to use eminent domain to condemn property around planned or current transit sites. As amended, the bill keeps eminent domain authority with municipal and state lawmakers.

The bill also no longer has the language that municipal governments “will” comply with the TCDA. Now local authorities would delineate the land designated for transit-oriented development, then enter into an agreement with the TCDA to turn that property over.

Bates considers the bill a threat to local communities and Connecticut’s tradition of home rule. I want to offer a different perspective that might explain why Governor Malloy and his supporters in the Legislature might be willing to consider what seems to be a drastic step.

Transit-oriented development, or TOD, is a central pillar in Governor Malloy’s statewide transportation plan. And there have certainly been successes; the new CTFastrak busway, connecting Hartford and New Britain, has spurred redevelopment along its route, and the governor’s office has made funds available to further TOD efforts in that corridor and along the soon-to-open New Haven-Hartford-Springfield (NHHS) rail line. Malloy has not just pushed the state’s significant (and expensive) transit projects, but has put considerable capital, both political and fiscal, behind the state’s efforts to build TOD around the new or revamped stations.

The problem is that Connecticut’s municipalities have not always been amenable to the state’s TOD strategy. A 2013 Regional Plan Association Report entitled “Halfway There” revealed that of the stations along the Metro-North New Haven Line, the state’s busiest transit corridor, only around half had (realized or envisioned) plans for mixed-use walkable development in the station area. 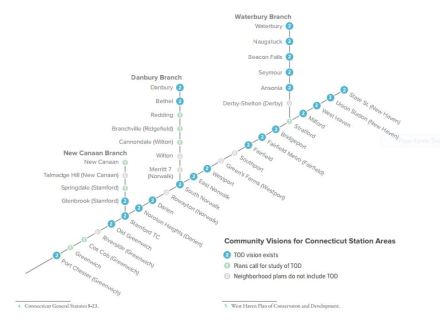 From RPA report “Halfway There,” http://library.rpa.org/pdf/RPA-Halfway-There.pdf

Last year I wrote about how Meriden, whose Amtrak station will be upgraded for the NHHS service, is wasting the potential for true TOD in its downtown, planning to use a huge lot across the street from the station for a park rather than dense development. Newington, along the CTFastrak corridor, has (over the objections of its well-meaning economic development chief) considered implementing a moratorium on high-density development. Taken together, these developments–or really, lack thereof–reveal an ongoing threat to Governor Malloy’s transit- and TOD-centered agenda: the ability of individual municipalities to sabotage the state’s efforts through uncooperativeness or obstinacy.

Quite simply, the ability of Connecticut’s municipalities to prevent TOD not only undermines principals of progressive development but threatens the the viability of the state’s expensive transit investments themselves. It’s a pattern that has played out repeatedly across the country: some higher level of government, be it federal, state, or regional, invests significant money and energy in building a new transit system, only to see the municipalities along the line reserve the benefits of the investment for existing residents of the area. The rhetoric may be about local control and “the character of the area,” but the realities of the movement are all too often more cynical. Pocketing the benefits of state investments in mobility while denying them to other people who may wish to relocate to the area and refusing to allow growth that will enhance the state’s investment is not only regressive; it is the kind of rent-seeking that has handicapped transit planning all across the country for years. Connecticut must do better, or its aggressive transportation investment program will largely go to waste.

A CTFastrak bus demonstrates the state-municipality disconnect as it approaches the not-yet-complete station at Asylum Street and Union Place in Hartford, 3/29/15. The buses and busway are a state investment; the not-ready-for-opening-day downtown stations are the responsibility of the City of Hartford.

Is the bill that the Malloy administration is currently pushing the right way to correct this imbalance? In truth, the bill, especially in its watered-down form, won’t make the state’s powers that much greater, since it already holds power of eminent domain. The bill would seem to exempt state-owned properties from local zoning–a major step–and would centralize parking rates in the station area in state hands, which is a no-brainer. It would also create a central administration for station areas, which could be good or bad, depending on the leadership and competence of that authority. I wonder, though, if there is a middle way forward where municipalities that are willing to voluntarily follow the principles of TOD could maintain local control so long as they meet a checklist of requirements that would allow the state to maximize its investment. I’m sure many of the larger cities would be thrilled to work with the state on that approach. It’s also worth noting that state priorities aren’t always the most progressive; the state has recently agreed to fund a second massive parking garage for New Haven’s Union Station.

In the meantime, though, the Malloy-backed idea of centralizing land-use authority in station areas might represent a way forward for numerous transit systems across the country. Imagine if instead of building transit and just hoping the local municipality will do the right thing, states and authorities could go about their infrastructure business secure in the knowledge that land use will support, not sabotage, ridership potential. Stephen Smith made the argument on Friday in New York YIMBY that “Community Control is Destroying America’s Cities,” and while he may overstate the case to some extent, similar dynamics have too often played out around new transit investments. Let’s give Dannel Malloy’s efforts at state-driven TOD a shot. After all, it may be a power grab, but it’s not about abusing authority; it’s about protecting an investment from those who would waste it. That’s a principle citizens of any ideological stripe can get behind.