I’m a big fan of the NHHS rail project, which promises to connect New Haven, Hartford, and Springfield with (more) frequent commuter rail service beginning in 2016. The project’s promotional materials have heavily promoted the corridor’s transit-oriented development (TOD) potential, promising to concentrate development in areas around stations all along the line. That’s a promising tack in Connecticut, which suffers from sprawl and has significant available urban land for development (with the possible exception of New Haven), but now I’m wondering about the commitment of project managers and state and local governments to true TOD.

This morning, the @NHHSRail account tweeted out the following:

Just so that we’re clear, the tweet juxtaposes the hashtag #TOD with a promise to build a parking lot—a parking lot!—immediately adjacent to the to-be-rebuilt Meriden station. Let’s just be very clear—under no circumstances does placing a parking lot next to the rail station qualify as transit-oriented development. The original article, from the local newspaper, explains that the building currently standing on the site is vacant and was acquired by the state by eminent domain for the sum of $675,000, which does seem excessive for a single-story empty building in a far-from-vital ex-industrial city…but I digress.

As you can see from the pictures accompanying the article, the existing building is no prize, and its demolition is probably nothing to mourn; but seriously, we can’t use a lot immediately adjacent to the station for something other than parking? Maybe folks don’t want to live right next to the tracks, but hey, I’m from Chicago, where watching trains 20 feet away from your window is a pop culture reference. The renderings for the station area give a pretty good idea of how the area will look (the lot in question is at the lower right hand corner):

The lot is certainly big enough for a good-size development, and it’s no closer to the tracks than many of the other buildings in the area. Also, there’s certainly no lack of parking in the immediate area: 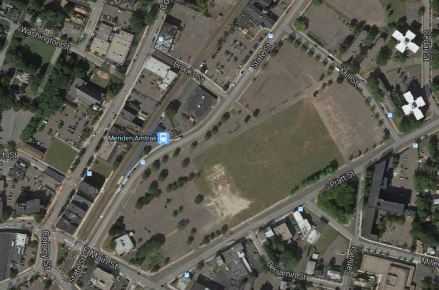 And remember: this is Meriden, which people from New Haven (where I grew up) think of as a sad sack. There’s not exactly much demand for all that surface and street parking. So why, exactly, is the state going to the expense of building a whole new lot, at the expense of mis-using a prime TOD site?

My concern with Meriden’s TOD plans doesn’t, however, end there. For one thing, the new parking lot and station will mean the closing of the Brooks Avenue grade crossing at the northern end of the station site, which can be seen above. Grade-crossing elimination is a good thing, but disconnecting elements of the grid is usually a bad one.

And then there’s the giant hole in the urban fabric across State Street from the station. Reeking of urban renewal, it is indeed a product of that damaging period in Connecticut history; it was once home to the failed Meriden Hub mall. A sequence of aerial photographs from NETR Online tells the story:

And of course, you can see contemporary imagery above. The site, of course, did not sit empty for the last 50 years; for most of the intervening time, it looked something like this:

And today? Well, the city of Meriden has a grand plan to turn the empty lot into a park. A very pretty park, to be sure, and plans including daylighting the covered-up creek that’s visible in the 1966 photos, but…come on. You have a giant piece of empty land, across the street from a train station, in an area with serious highway congestion and demand for transit access. Meriden is an easy commuter to New Haven, Hartford, or Springfield, and a several-days-a-week commute to New York City is totally feasible. Sure, the downtown has a long way to come, but every unit we don’t build in transit-adjacent areas gets built in sprawling ones. And this is a lot with potential to house hundreds, if not thousands, of people.

A comprehensive, corridor-wide TOD approach recognizes this reality and stresses the crucial nature of using land near transit facilities efficiently. Building consensus among all levels of government so that city governments don’t go off-message like this is a necessity. Meriden has extensive plans for other downtown TOD, but you can’t just throw away your biggest lot like this. Once it’s a park, it’s never going back. And that’s a shame, because actions like the ones showcased here, seemingly innocent decisions made to solve apparently obvious problems, have the potential to totally undermine the entire corridor’s–really the entire state’s–TOD approach.