A couple of weeks ago, following a series of bureaucratic screwups that nicely illustrated why the American medical system is so inefficient, and a monthslong period of coping with my own fear of needles, I had occasion to visit UAlbany’s medical center for the first time, to get a vaccine. Given that I am part of a two-partner, one-car household, with both of us working this summer, just getting there was harder than it would seem to be.

The UAlbany health center is located in a nondescript office building housing other medical offices in an off-campus office center, located over a mile from the center of campus, embedded in a vast sea of parking lots: 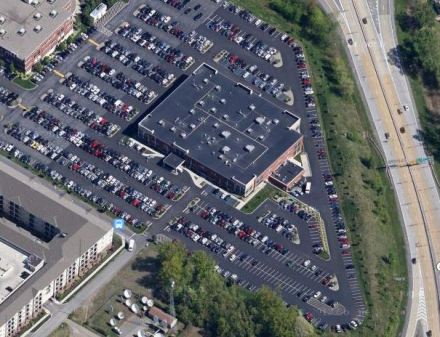 Unsurprisingly, it’s awfully hard to get there using the university student’s typical modes of transportation: walking, biking, or transit. The Health Center website contains this nugget of auto-oriented wisdom:

I love the “We do not recommend walking” part. It’s a very honest acknowledgement of the university’s failures in placing the health center where it did. In any case, someone like me who lives off-campus (and/or is working downtown, like I am this summer), but does not have access to a car, has to take a bus (the local transit system, by the way, has an on-time performance of 65%) to the center of campus, then hope the timing works out to catch an incredibly infrequent shuttle over to the health center.  And why can one not walk to the health center from campus? Perhaps because doing so would involve crossing this:

That’s four lanes of traffic with a nominal speed limit of 40 mph (but designed for much higher, so of course everyone speeds). The rest of the area is bisected by highways as well, with motorized travel being truly the only safe way to move around, as can be seen in the graphic below, which highlights the route shuttles and other motorized traffic takes between Collins Circle (the center of campus) and the health center (click to embiggen).

Well, you might say, Washington Avenue is a big street. There must be a bus route on it that serves the Patroon Creek office park? And indeed, CDTA’s #12, one of its most frequent routes, runs down Washington. But there’s no stop for Patroon Creek. The two nearest stops are at Fairfield Inn and Brevator Street, each separated from the Patroon Creek complex by a depressed multilane highway. And why no stop directly on Washington for the complex itself? I imagine it has to do with the fact that the office complex is cut off even from Washington by a multilane frontage road that accommodates high-speed traffic and would be completely unsafe for pedestrians to cross.

But wait! If you zoom in far enough, you can see a little bus-stop symbol on Google Maps, right next to the health center! 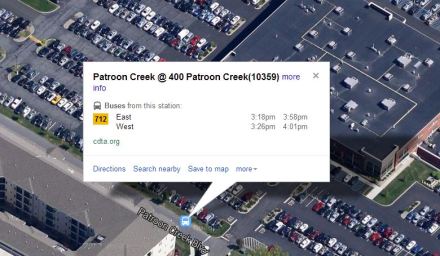 Alas, the 712 Harriman-Patroon Creek. It’s a noble sacrifice to the bare necessities of moving desperate people by bus to employment centers which were never intended to be reached by anything other than cars. It runs 13 times westbound and 15 eastbound per day, achieving a maximum frequency of every 30 minutes at rush hour, complete with 2-3 hour midday gaps in service. That’s barely a useful service, though it’s been relatively well-patronized every time I’ve ridden it (when it’s been the first bus to show up at Collins Circle after class on a cold day!). Oh, and the route map in the Harriman-Patroon Creek area looks like this: 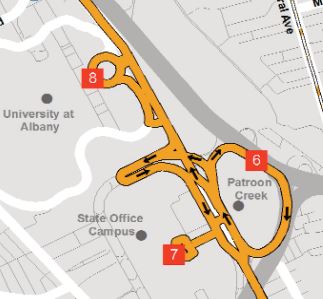 In honor of that truly impressive deviation, I offer one of my own, a brief take on transit and the Harriman Campus: that’s about as bad as it gets. The Collins Circle loop is necessitated by CDTA’s student-focused ridership, but the rest of the loop-de-loop is purely a product of just about the worst “urban” design and land-use policies imaginable. Again, this is the ONLY bus route directly serving a state office campus that’s home to at least 7,000 employees. And what’s worse? No one can blame CDTA for this paucity of service–there’s simply no realistic way to do it with the current arrangement of frontage roads, highways, and overpasses. And remember–this land is all within the limits of the city of Albany.  Change is coming with the planned Purple Line BRT-lite service, which will include a busway through the western half of the Harriman Campus and the UAlbany campus, but for now…just what a dreadful exhibition of auto-dependent land dynamics.

And now back to my regularly-scheduled kvetching about the isolation of UAlbany’s health center. It’s no surprise that someone like me, who almost always gets to and from campus by bus, finds it intimidating to commit the time necessary to visit the health center. To catch a shuttle that only runs every half hour, you need to get your timing right, and hope it doesn’t interfere with classes or meetings. If you don’t have a car, and you’re not coming from central campus, it is the very next thing to impossible to get there without making the infrequent connection at Collins Circle. I don’t want to think about the number of students who have declined healthcare, or counseling, or whatever because of the sheer difficulty of getting to what should in any reasonable world be a central service on campus. UAlbany may have intended to take advantage of colocation with other medical providers by putting the health center in 400 Patroon Creek Boulevard, but it’s the students who paid the price for that “efficiency.”

How did I get there, eventually? I left work early, took a bus from downtown to Collins Circle, and then my partner G (who had also left work early) picked me up and drove me to the health center. Because there’s not really any other way.