The Albany Times-Union reported on Sunday that CSX, freight railroad owner of the old New York Central Water Level Route, had officially filed with the state Department of Transportation its opposition to the state’s proposed improvements to the Empire Corridor West passenger service.  This isn’t particularly surprising; CSX has long opposed the project and has for quite a while developed a corporate reputation for not being a fan of passenger rail sharing any of its infrastructure. That being said, the claims that CSX seems to have made in its letter of comment on the Empire Corridor EIS say a good bit about its corporate strategy, and potentially about the future of passenger rail in New York.

The Times-Union acquired a copy of CSX’ letter, but did not provide direct quotes in its article. Instead, it summarized the railroad’s objections thusly (caveat: not a full list):

CSX said additional passenger trains would only add to the congestion, causing delays and hindering access to freight customers on sidings along the main rail line.

Without adequate separation between the freight tracks and a newly constructed passenger track, high-speed trains also would pose increased danger to CSX track crews, it said.

CSX criticizes the methods used to compile the draft statement, pointing out that projected costs don’t include payments for use of CSX property, which it says is worth “billions.”

CSX also said the statement doesn’t consider other, more cost-effective, ways to improve passenger mobility from upstate cities such as Syracuse, Rochester and Buffalo that are along the route, including improved bus service and air service.

And it says the study should have considered the Albany-New York City and Albany-Niagara Falls segments as two different corridors, allowing policy makers to proceed with improvements on the first and choosing the “no-build” alternative for the second.

These objections are, not to use too fine a word, bullshit. And I think CSX knows that, and the state DOT knows that, and anyone following the situation carefully should know it too. I’ll provide a brief fisking here:

–The recently (ok, a few months ago) released DEIS explicitly only covers the portion of the line west of Albany; that’s the whole point of calling it the Empire Corridor West study.

–The entire project is predicated on the separation of passenger trains from freight on an entirely new track, thus getting them out of each others’ hair.

–Railfan forums (yes, they can be a good source of information; career railroaders know a lot), in particular this one, have long studied CSX’ claim that only three tracks will fit where four used to be and two exist today. CSX’ logic is that the distance between track centers now needs to be 30 feet, where 15 sufficed historically. The consensus is that CSX’ insistence on 30′ track centers is completely unnecessary.

–The DEIS makes very clear (page 1-6, for those who are interested) that the cost numbers it calculates do not include buying the right-of-way from CSX and otherwise compensating the railroad for inconvenience; that will occur at Tier 2 of the EIS process.

–The EIS itself makes very clear, and to its credit the Times Union includes in its article, that NYC-Upstate, much less intra-Upstate bus and especially air services are in no way competitive with better train service. Buses don’t get people out of cars, and air service is unprofitable in those corridors and prohibitively expensive for most travelers in any case.

–CSX’ claim about the fragility of capacity of the Mohawk Subdivision, its designation for the line across Upstate New York, is very, very suspect. A 2012 CSX network planning document makes clear that the Mohawk Sub is currently under-capacity (in contrast to, among other routes, the freight-only, single-track West Shore Line): 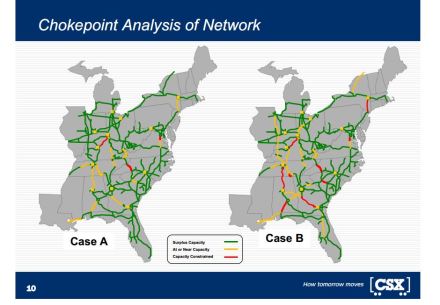 Meanwhile, the 2009 NYS rail plan also shows the Mohawk Sub below capacity, and envisions it only beginning to approach capacity in 2035, despite predicted increases in traffic. CSX claims that increased traffic from the Panama Canal widening is likely to move across the Mohawk; most observers think that container traffic to the Midwest will continue to move via West Coast ports, with increased traffic to East Coast ports being confined to the coastal area. Certainly, Amtrak trains are disruptive to CSX’ 50-60 freights a day on the Mohawk; but they are clearly not having any significant impact on the line’s reliability. Indeed, despite federal rules mandating that Amtrak trains be given priority, the 47% (!!!!) on-time performance of Empire Corridor trains west of Albany indicates that they’re not exactly the top priority of Mohawk Sub dispatchers.

So if CSX’ objections to New York’s plan are mostly bull, and can be dealt with easily if they’re not, what’s going on? Why bother to object to a project that is potentially lucrative (if the state pays the billions that CSX claims half the ROW is worth) and would significantly improve the railroad’s image at a time when well-publicized gas train explosions are proving to be a massive PR problem for the industry?

There are, in my opinion, at least two separate dynamics in the CSX-NYS impasse, both of them essentially political in nature. First is CSX’ strategy for dealing with its busy, but expensive and competitive (between freight and passenger traffic) legacy lines in the Northeast. For years, CSX has gotten cash from the Massachusetts state government for improvements to its ex-Boston & Albany line over the Berkshires, while at the same time intentionally not agreeing to capacity improvements that would have allowed the MBTA to run more commuter trains between Boston and Worcester; when business east of Worcester proved less profitable than trucking most goods into Boston from an intermodal terminal in Worcester,  CSX sold the Boston-Worcester segment of the line to the Commonwealth. Meanwhile in New York, CSX and the state long maintained a cost-sharing arrangement for the upper portion of the Hudson Line, the Empire Service’s southern leg; as soon as the (always limited) freight demand on that line dipped, and the state proved willing to pony up, CSX leased the line to Amtrak. The strategy is clear, and quite smart: CSX milk public funds made available to its infrastructure for all they are worth, while intentionally not making capacity improvements that would allow more robust passenger service; as soon as the states tire of the situation and prove willing to pay up, the railroad is suddenly willing to sell.

The second dynamic has to do with the Andrew Cuomo administration’s lukewarm relationship with transit. As Alon Levy has written, it’s pretty clear that the Cuomo administration sandbagged proposals for a “true” Empire Corridor high-speed rail system by arguing that government can’t build infrastructure projects during a recession and publicizing inflated cost numbers.  The numbers the DEIS includes for the Empire West improvements are likely inflated too ($6 billion for a few hundred miles of third track on an existing ROW?), and the administration’s indifferent attitude towards the project–and any other kind of transit, really–has come across pretty clearly.

Cuomo values his image as a business-friendly, tax-cutting centrist governor, clearly believing that it separates him from other Democrats in the national field (we can, of course, argue about whether this is true, or whether it’s working for him in his own state). As Alon wrote in the first post linked to above, “Although Andrew Cuomo likes flashy public works projects, of which HSR is one, he is consistently pro-road and anti-rail.” This isn’t, I think, a particularly ideological stand (though it might have something to do with Cuomo’s well-know affection for vintage cars); rather, it’s a product of Cuomo’s desire to appeal electorally to white, wealthy suburban voters (=drivers) in a state where Democrats have long, and for good reason, been identified with New York and other cities. Nowhere has that come across more clearly than in his administration’s transportation and infrastructure priorities. Though the transit-advocate furor over the administration’s raid of the MTA budget for Verrazano Narrows Bridge toll relief was probably overstated given the relatively small amount of money involved, the raid was a clear indicator of an administration that cares more about attracting swing Staten Island votes than rewarding its loyal soldiers in the other boroughs, who are going to vote for the Democrat anyhow (especially after the combustion of the potential Working Families Party challenge to Cuomo). Similarly, Cuomo’s hugely expensive, unnecessary, and controversial (seriously? Clean water money for a car bridge?) new Tappan Zee bridge is clearly a sop to suburban populations in Rockland and Westchester counties.

So…I’ve been rambling. What do CSX’ intelligent strategy for maximizing profit from its legacy Northeastern holdings and Andrew Cuomo’s antipathy to transit have to do with each other, and with Empire Corridor West? I believe that CSX corporate management is watching the Cuomo administration very carefully, and is very much aware of its reluctance to invest serious money in transit. So CSX is going to, quite logically, play a waiting game. Their interest is in getting a massive payoff from New York State for the right to reclaim half of the Water Level Route ROW for passenger rail. With the Cuomo administration unlikely to want to invest the kind of money such a deal would take, their will almost certainly be no political ramifications in the short term for CSX’ intransigence. CSX is gambling that, in the medium run, if the next gubernatorial administration finds the Empire Corridor West situation unacceptable (and I certainly don’t see passenger OTP improving under current conditions), it will be willing to pay the company a massive amount of money.

If there’s one good for passenger rail that could come out of CSX’ reluctance to cooperate with the Empire Corridor West project, it’s that it might allow–or even force–future administrations to revisit the idea of true HSR in the Empire Corridor. Improved regional service in the corridor is better than nothing, but Upstate New York desperately needs an economic game changer, and nothing can match HSR for that potential. If CSX is truly unwilling to deal–or if, as I suspect, the price of a deal is just going to be incredibly high–studying HSR (at realistic prices, not the Cuomo administration’s inflated ones) may again become an attractive option.

In the meantime, it’s not like New York State has no leverage in the situation. CSX has long essentially held a monopoly on rail freight traffic into New England, a status enabled in recent years by Massachusetts’ investment in allowing modern freight car clearances and weights on the Berkshire Line. In recent years, though, the other titan of Eastern railroading, Norfolk Southern, has begun to challenge CSX’ chokehold on the region. Using traffic rights over the Delaware & Hudson’s longtime bridge route from Binghamton to the Capital Region, and an alliance with New England regional Pan Am east of there, NS has gradually built up a modern infrastructure for its traffic in the market. NS/Pan Am Southern is not yet capable of challenging CSX; in particular, the eastern part of the allied route, east of Mechanicville, would require significant investment to bring up to modern double-stack clearance/315,000 lb freight car weight standards. Norfolk Southern is beginning to pour in some of the necessary on its own, but if the state threatened to ally with Massachusetts to fully prepare the NS/Pan Am route for competition with the Berkshire Line, one imagines that CSX might find it shares more interests with the state than it thought. Just don’t count on any of those things happening.